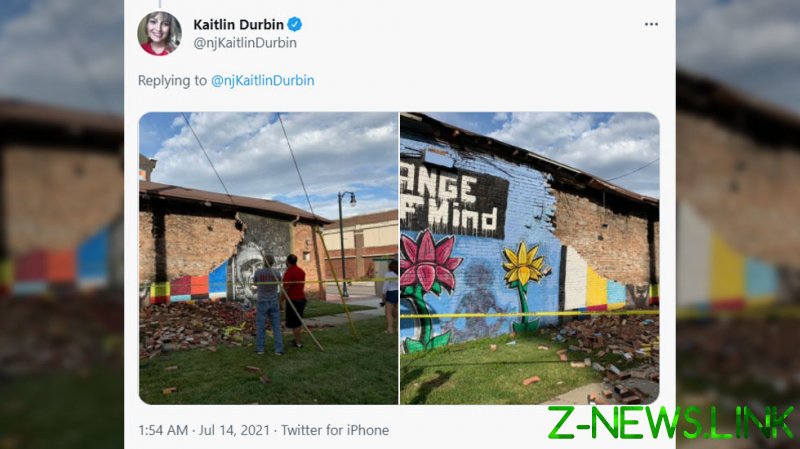 The mural of Floyd, titled ‘Take A Breath’, was destroyed on Tuesday, local media reported. It was painted last year on a building that used to house a bar, during protests by the Black Lives Matter (BLM) movement. The artist, David Ross, claims he was criticized for the initiative at the time and even received threats, according to local media.

Based on images posted on social media, other murals surrounding the disintegrated image of Floyd’s face were left almost unscathed. Police secured the scene while the owner of the building cleaned up the painted bricks and worked on tearing down the rest of the wall.

A local building inspector initially said the wall might have collapsed because of old age. “It was just age. It just came away. It happens to the older buildings,” he said, as quoted by Toledo’s The Blade publication. However, the inspector added that the building itself was structurally sound, local ABC-affiliate WTVG reported.

A spokesperson for Toledo’s Fire and Rescue Department said a lightning strike destroyed the mural. A witness told authorities they saw lightning hit the exact building, and rescuers confirmed this to be the cause, local media reported, adding that their own weather radar had also registered lightning in the area.

The artist has announced plans to restore the mural regardless of the cause of the destruction. “I’m going to do it again whether it was natural or vandalism,” Ross said, while city authorities have already reportedly promised to assist in finding a new location.

George Floyd, killed in police custody last year in Minneapolis, became one of the symbols of the Black Lives Matter (BLM) movement. Murals and other Floyd tributes have emerged across the country, however, opinions are divided on whether such a level of ‘canonization’ is appropriate. Last month, a sculpture of Floyd’s head was vandalized in Brooklyn, New York. It was splashed with paint and stenciled with a reference to a white nationalist group.