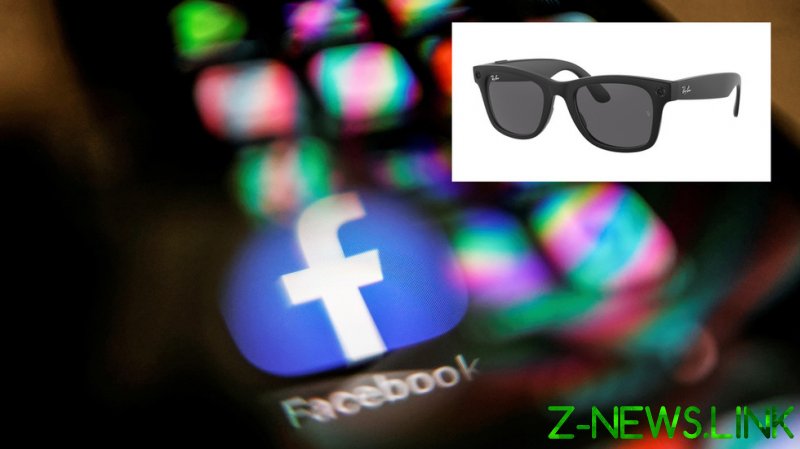 The first product of a reported multi-year device partnership with Facebook, Ray-Ban ‘Stories’ sunglasses are almost indistinguishable from normal eyewear – except they sync up with a companion app called Facebook View on the user’s phone and require a Facebook account to use, according to Alex Heath, who tested them for The Verge. As of Thursday, the $299 glasses will be ubiquitous, on sale at all sunglasses stores that stock Ray-Bans.

In addition to two forward-facing cameras for taking photos and video, the glasses contain dual Bluetooth speakers – the better to record your phone calls with – and boast a six-hour battery life with USB-C charger. According to Heath, the image quality pales in comparison to normal smartphones, making the glasses more useful for unobtrusive, spur-of-the-moment, or hands-free image capturing. The accompanying app allows basic editing of clips and photos, with the capability to share the content with other apps (apparently not just Facebook).

Unlike their ill-fated ancestors Google Glass, whose distinctive look made it immediately clear when an individual was wearing them (and possibly recording their surroundings), Stories look and feel almost exactly like Ray-Ban’s blockbuster Wayfarer style, according to Heath. According to The Verge, the tiny white recording light on the edge of the lens is so “dim” that it  “could pose privacy concerns if people don’t realize the glasses are capturing photos or video.”

Like Amazon’s Alexa, Apple’s Siri, or Google Home, Ray-Ban Stories are activated with a ‘wake phrase’ – “Hey Facebook,” in this case – and also sport a physical button on one side of the glasses frame that would come handy to those who doesn’t want to let the whole room know they’re being recorded. It remains to be seen if, also like Alexa, Siri, and Google Home, the glasses are capable of activating themselves during intimate moments due to “mishearing” the wake phrase, or whether Facebook content monitors will also be listening in to tune the glasses’ voice recognition, as was the excuse when Amazon, Apple, and Google were caught with their hands in the data cookie jar.

The privacy policy that one must page through to actually use the glasses makes it clear Facebook has permission to collect data about how the device is being used, but insists the company isn’t analyzing the content of the recordings saved in the View app for the purpose of targeting advertising.

Facebook’s adoption of a technology capable of recording the user’s every waking move calls to mind the Pentagon’s long-dormant LifeLog project, which aimed to record a complete visual diary of the user’s life – except that it was to be rolled out under the aegis of the US government at a time when Americans were deservedly wary of mass surveillance. The Defense Advanced Research Projects Agency (DARPA) killed the LifeLog project in 2004 for reasons that were never made public, just in time for the rollout of Facebook, which some speculated was designed as a kinder gentler private-sector version of the Pentagon’s spy app.

Like Facebook, LifeLog aimed to “build a database tracking a person’s entire existence,” from their social relationships to their media consumption habits, their purchases (Facebook Marketplace), their communications (Messenger, WhatsApp), and package the data on memories, events and experiences into “discrete episodes” (Facebook Memories). Also like Facebook, it would include location tracking, keep tabs on what non-Facebook sites the user visited, and ultimately be able to predict the user’s actions before they knew themselves what they were going to do. DARPA’s documentation on LifeLog acknowledged as much, noting that the project “will be able . . . to infer the user’s routines, habits and relationships with other people, organizations, places and objects, and to exploit these patterns to ease its task” of surveillance.

Given the recent reports that supposedly-encrypted Facebook messaging subsidiary WhatsApp is not only not actually encrypted but has been feeding users’ messages to law enforcement), not to mention the hundreds of millions of dollars in fines Facebook has racked up for repeated and wanton violations of users’ privacy, it’s difficult to believe the images glimpsed through Ray-Ban ‘Stories’ aren’t going to end up in a government database with the rest of the data US and allied intelligence agencies have been scraping from Facebook for so many years. But unlike in 2004, the internet users of 2021 appear to have learned to love Big Brother so much they think nothing of paying to let ‘him’ see the world through their eyes.