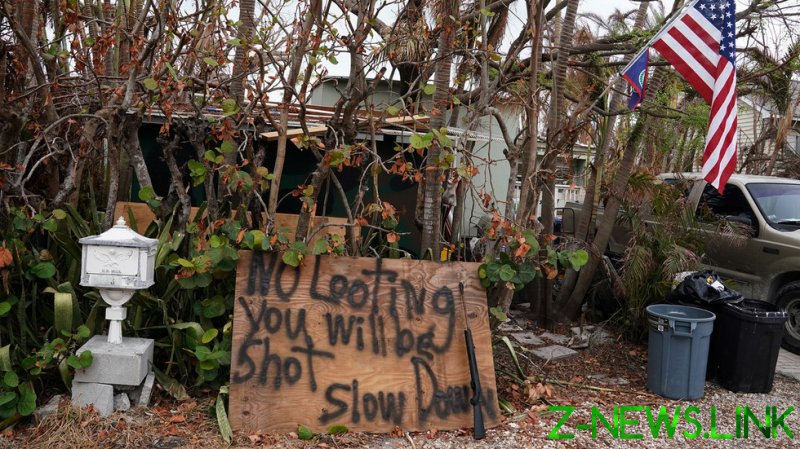 While no official proposal has been filed, the Miami Herald reported on the bill’s existence, citing documents obtained through a public records request. Under the reported proposal, Florida’s existing “stand your ground” doctrine justifying the use of force in self-defense would be expanded to people engaging in rioting – “interruption or impairment” of a business – and looting, defined as a burglary within 500 feet of a “violent or disorderly assembly.”

Other measures in the draft would see harsher penalties for those convicted of looting or rioting, including those who block traffic – while offering immunity to motorists who unintentionally injure or kill protesters who get in their way.

Anyone convicted of participating in “violent or disorderly” assemblies would be ineligible for assistance benefits, while any government employees who take part would be fired. No one charged in relation to riots would be allowed bail before facing a judge.

DeSantis also wants municipalities to certify they are not “disproportionately” cutting law enforcement funding, and prove that any cuts are due to a reduction in revenue.

If any of these things sound familiar, that’s because defunding the police has been a key demand of Black Lives Matter protesters over the summer, while Democrat prosecutors – often elected with the help of George Soros’s deep pockets – have moved to abolish bail and release people arrested for looting and rioting, while prosecuting motorists and citizens who defended themselves.

Not surprisingly, Democrats are up in arms about the proposal. Miami Beach Mayor Dan Gelber said DeSantis is trying to be a contestant in the “Trump beauty pageant” in which Republican officials are competing to see who would follow in the current president’s footsteps.

“It dangerously gives armed private citizens power to kill as they subjectively determine what constitutes ‘criminal mischief’ that interferes with a business,” Aubrey Webb, former prosecutor in the Democrat stronghold of Miami-Dade, told the Herald. “Someone graffiti-ing ‘Black Lives Matter’ on a wall? Urinating behind a dumpster? Blocking an entrance?”

The bill would encourage vigilantes to administer “cruel and unusual punishment” for property crimes, argued his colleague Denise Georges. “We cannot live in a lawless society where taking a life is done so casually and recklessly.”

DeSantis’s proposal appears to be a response to the riots that broke out across the US in May, following the death of George Floyd, an African-American man, in police custody in Minnesota. Arson and looting across the country has resulted in at least 20 deaths and more than $2 billion in property damages in just the first several weeks, according to conservative estimates.

The judiciary committees of the Florida Senate and the state House have both received a draft of the bill, the Herald reported. So far, no lawmaker has publicly said they would sponsor DeSantis’s proposal. Committees begin their meetings in January, and the legislatures will start their 2021 sessions in March.