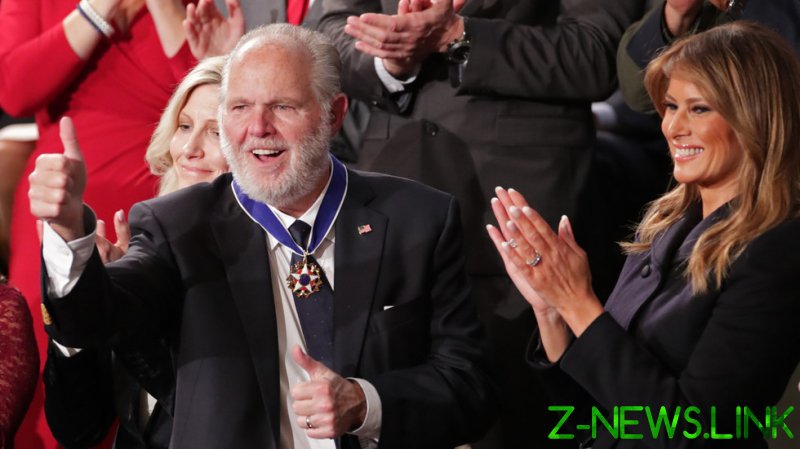 It took minutes for liberals to politicize the death of Limbaugh, which was announced Wednesday on his radio program by his wife Kathryn. Limbaugh was 70.

While Limbaugh was a window into the world of politics and a thought-provoking radio personality to many, to others it appears he was the devil himself. One would think he was a full-blown terrorist or murderer based on some of the reactions to his passing away.

“Rush Limbaugh was one of the most harmful and poisonous people in the modern United States of America,” author and ‘political analyst’ Jared Yates Sexton tweeted.

What was Limbaugh’s crime, you may wonder?

“His pursuit of wealth and power hurt untold numbers of people and wrought incalculable damage to politics as a public good, society as a whole, and the planet itself,” Sexton wrote.

Others were much more blunt with their hate.

Limbaugh, for the record, was not a journalist but an entertainer and an opinions-host who analyzed politics through his own conservative brand.

One of the sadder trends on social media to gain popularity after Limbaugh’s death was the hashtag #restinpiss, which many gleefully used to celebrate the radio star’s death.

Some have been a tad more calculating in their reactions to Limbaugh’s death, ditching the foul language and extreme points and instead diminishing the man’s life by defining him with political points they disagree with.

“The voice of conservative America, he dominated talk radio for more than three decades with his attacks on liberals, Democrats, feminists, environmentalists and others,” The New York Times sleekly tweeted about Limbaugh’s death.

“The idea that you say artificially nice things about people after they die is weird. I’ve never understood the logic of it. Rush Limbaugh was a terrible person while he was alive. He made a living by attacking the powerless. His death does not in anyway change or redeem that,” Young Turks’ Cenk Uygur added.

Would a liberal pundit get such treatment? Would the Times chalk their life’s work up to attacks on conservatives, pro-lifers, gun-rights activists, etc.? Or would there instead be a different tone taken?

Limbaugh has also received an outpouring of love, with many actually mourning the man and celebrating his achievements.

“He was very brave – I mean he in theory could have been done four months ago, really. He just, he was fighting till the very end. He was a fighter,” Trump said, revealing he’d spoken to the man he awarded the Presidential Medal of Freedom to only days before.

There is a sharp contrast in the way talking heads on the left and the mainstream media ‘mourn’ a conservative versus how a large part of the right mourns someone on the left. Liberal icon and Supreme Court Justice Ruth Bader Ginsburg, for example, was not someone many conservatives could find themselves agreeing with, but did as many of them dance on her grave and celebrate a perceived political win when she passed away?

The point is not left vs. right. That should never be the point of any conversation following a human being’s death. Celebrating someone falling ill and succumbing to cancer says nothing about larger political battles, but everything about your character. The fact that so many seem to belong to one side, however, shows that there is one political side that excuses such behavior and normalizes hatred, as long as it’s the right person.

Take politics out of the equation and Limbaugh was a man who pioneered political talk radio and opened doors for numerous other individuals to have their voices heard. He authored books teaching children about US history, and regardless of whatever shock-jock quotes his critics will take out of context, he was always willing to work with and respect people who disagreed with him. Over the years, he would appear on the liberal ‘Family Guy’ multiple times and become friendly with Elton John.

Political divides are quickly poisoning the US, and the celebration of Limbaugh’s death only further proves this point. We are judged today not for our actions, but for our views. Have the wrong ones, and you may lose a job or a platform. Espouse anything that breaks from the extreme woke talking points of the moment, and you are a hate-monger who is no longer a human being. This is how one side of the political divide can celebrate cancelling people and, worse, chalking up someone’s death as a victory.

It’s not a victory. And if it feels like it is, you are central to the cultural divide that is so quickly tearing this nation apart.