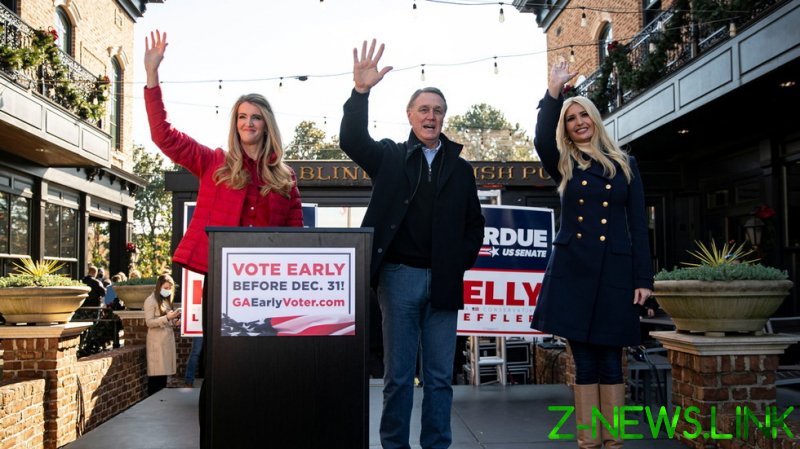 An unsigned statement from Perdue’s campaign sent out on Thursday evening said the senator had been notified of the contact earlier in the day.

Even though both Perdue and his wife Bonnie tested negative for the virus on Thursday, they are self-quarantining in accordance with CDC guidelines and on doctor’s recommendations, the campaign added.

With the CDC guidelines mandating at least a week-long isolation, this would mean Perdue will be absent from any campaign events ahead of the runoff election. Democrats, who hope to gain control of the Senate by winning both Georgia seats next week, reacted to the news with barely concealed glee.

Many said they wouldn’t even send “thoughts and prayers,” a phrase US liberals often invoke as the example of empty words following mass shootings or other tragedies.

While the reactions to Perdue’s announcement bear little relation to Democrat president-elect Joe Biden’s calls for “unity” and civility towards Republicans, they are not unprecedented.

It mattered little that Perdue was among the Republicans who seemed resigned to Biden’s victory and refused to back President Donald Trump’s challenges to election procedures and results in half a dozen states, including Georgia.

Trump’s official loss and the party leadership’s apparent unwillingness to fight it have demoralized many Republicans, even as Democrats surged funding and friendly media coverage to their candidates in Georgia, hoping to gain control of the Senate.

Though both Perdue and his colleague Kelly Loeffler came ahead of their challengers in the November election, neither won more than 50 percent of the vote, forcing the run-off. Now polls show the Republicans running behind Democrats Jon Ossoff and Raphael Warnock, respectively.

Winning both seats would put Democrats even with Republicans in the US Senate, with Vice-President Kamala Harris then acting as the tie-breaker after January 20, giving Democrats control of the White House and both chambers of Congress.

Perdue has served in the Senate since 2014, when he won almost 53 percent of the vote to replace the retiring Sen. Saxby Chambliss, also a Republican. Loeffler was appointed by Governor Brad Kemp earlier this year to replace Sen. Johnny Isakson, who retired in December 2019 citing health reasons.