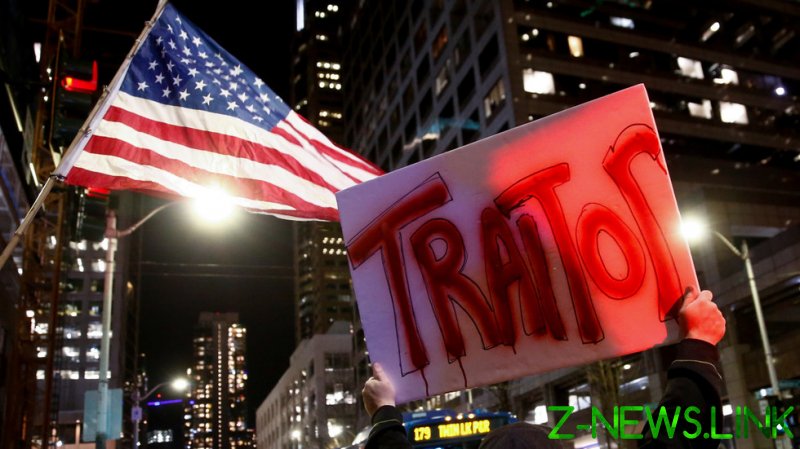 During a segment discussing the 2020 presidential election on OAN, known for being a heavily conservative network, Sharp implied there were thousands involved in “undermining the election” and branded them “traitors.”

He started by saying there were “widespread problems with voter integrity” in the election. Officially, these claims are denied over lack of evidence. Sharp then discussed potential multiple state audits of election results and asked what will happen in the end to those “responsible for overthrowing the election?”

“When all the dust settles from the audit in Arizona and the potential audits in Georgia, Michigan, Pennsylvania, Nevada, and Wisconsin, what happens to all these people who are responsible for overthrowing the election?” Sharp then asked. “What are the consequences for traitors who meddled with our sacred democratic process and tried to steal power by taking away the voices of the American people? What happens to them?”

Sharp then offered up an answer himself, one that triggered moral outrage as the clip spread across social media.

“Well, in the past, America had a very good solution for dealing with such traitors: Execution,” Sharp said.

The host went on to accuse “foreign governments,” including China and Pakistan, of “meddling” in the last US presidential election, making anyone involved in alleged fraud a traitor, “the highest of all crimes.”

“This would seem to violate a stack of Title 18 provisions against threats towards government officials,” liberal pundit Keith Olbermann, also known for employing rather extreme rhetoric, tweeted on Friday in reaction to the clip of Sharp, going on to say the Justice Department should be investigating the television host.

Critics not only slammed Sharp, but also used his comments as ammunition to attack other supporters of Trump and his right-leaning network.

Some went as far as branding OAN a “threat to democracy” and calling on advertisers to boycott.

Sharp defended his comments, saying he was not calling for mass executions, but again calling anyone involved in election fraud a “traitor,” a crime punishable by death.

“Neither myself, nor OAN is ‘embracing executing thousands of people,’” Sharp told Talking Points Memo in a statement. “OAN is simply pointing out that if election fraud is proven, then it could very well constitute treason. And according to our laws, treason is punishable by death.”