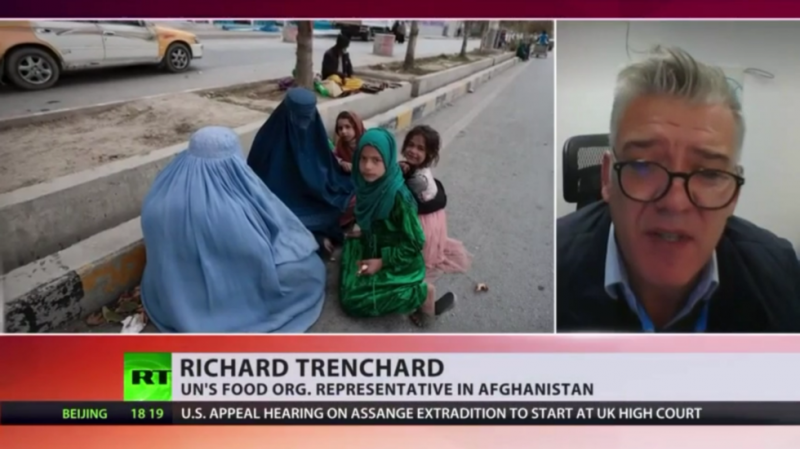 The country has been suffering from a severe drought and was hit by a “massive, almost total economic implosion that’s occurred in the last two months,” Richard Trenchard, the UN’s Food and Agriculture Organization (FAO) envoy and director for Afghanistan, told RT.

Most foreign aid has been suspended after Afghanistan was rapidly reconquered by the Taliban in an August offensive that coincided with the final stage of the withdrawal of US troops. The dire situation on the ground has led to a “terrifying” humanitarian crisis, Trenchard said.

Today we’re talking about 19 million people who are, as we say, acutely food insecure. That means they’re experiencing hunger on a daily basis. And we haven’t seen the worst yet.

According to the estimates by FAO and the UN World Food Programme (WFP), a record of 22.8 million people, or more than a half of Afghanistan’s population, will require food assistance next year.

Trenchard said the collapse of the country’s banking system has left cash-strapped farmers without basic needs like seeds and fertilizer. The outlook is grim, given that 70% of Afghanistan’s population lives in rural areas and winters there are typically severe.

“We’re projecting that, by the end of the year, nine out of ten of Afghanistan’s largest urban areas will be also facing acute food insecurity,” the UN official said, adding that children remain the most vulnerable.

Last month, the UN announced more than $1 billion in pledges to aid Afghanistan. However, so far only around $275 million of the promised sum has been delivered to humanitarian agencies like FAO, WFP and the UN Children’s Fund (UNICEF), Trenchard explained.

“But, to be quite honest, it’s only going to be a drop in the ocean. The situation is deteriorating so quickly and so dramatically,” he said, calling for a “massive increase” in humanitarian assistance to Afghanistan.

Trenchard also said the international community must find ways to resume helping Afghanistan’s hospitals and bring back other vital development assistance that was cut after the Taliban takeover.

Last week, the International Monetary Fund (IMF) warned that the Afghan economy could shrink by up to 30% due to a mixture of factors, including falling imports and growing inflation.

Afghanistan was first ruled by the Taliban militants between 1996 and 2001. The group was expelled from Kabul and other major cities by a US-led invasion. The operation was part of Washington’s global campaign against Islamists in response to the 9/11 terrorist attacks on American soil.

The Western occupation failed to bring about peace and stability, as the Taliban insurgence raged for nearly two decades. The militants seized Kabul with little to no resistance on August 15, prompting the UN-backed President Ashraf Ghani to flee the country.