Home / WORLD / Letting Ukraine join NATO would be a dangerous escalation with Russia. But it would also be a disaster for Kiev & the West itself 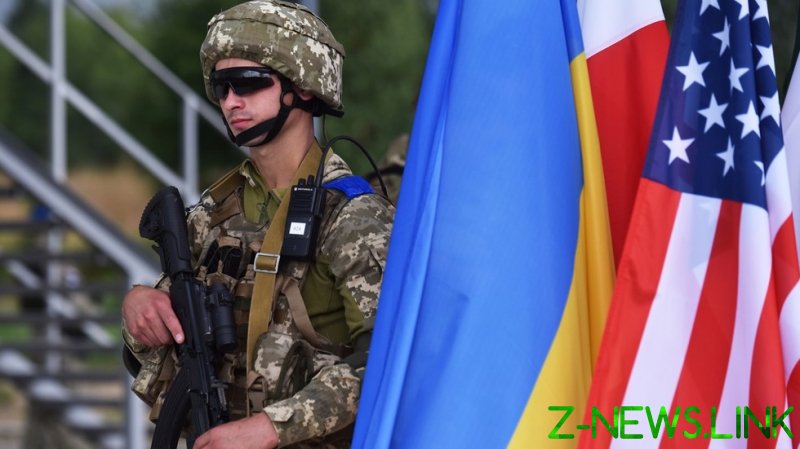 In a documentary recently aired on French TV, President Vladimir Putin’s spokesman, Dmitry Peskov, has confirmed exactly that. You may, of course, disagree with this assessment, or even resent it. But, equally obviously, to ignore it would be stupid.

Governments sometimes bluff, it’s true. Yet it would be a reckless gamble to count on Russia not meaning what it says when it sends such a clear warning. Especially since it does not only oppose full NATO membership for Ukraine, but also what Moscow sees as the excessive expansion of Western military infrastructure in Ukraine. This, as well, has been identified as a “red line.”

In other words, Russia will not even accept a situation in which Ukraine remains formally outside NATO but the bloc embeds itself de facto in Ukraine. That means there is limited room for compromise. Short of Ukrainian membership, Moscow refuses to live with too much cooperation between Kiev and the West either. Exactly how much would be too much is unclear, but that is irrelevant. The key fact is that Moscow has stated that there is a limit and that it is of essential interest to it that it won’t be exceeded.

You may think that all of this is not very relevant or at least not urgent. After all, recent signals from both the USA, NATO and its leadership have been discouraging toward Ukraine’s leadership. Despite Ukrainian President Volodymyr Zelensky’s undiplomatic insistence on a straight “yes or no” (really meaning “yes,” of course) on a clear path to membership, US President Joe Biden offered no such thing, essentially telling Zelensky to cool it. And Jens Stoltenberg, NATO’s general secretary, does not have anything better to offer either.

Yet Ukraine has made NATO membership a key goal, going so far as to change its constitution to pursue it. The issue will not go away and has the potential to escalate or lead to costly misunderstandings, as it did with Georgia in 2008.

Thus, clear statements from Moscow are, actually, a good thing. Transparency, even if inconvenient, is better than ambiguity. The problem with these kinds of communications from Russia, however, is that they tend to provoke a kneejerk reflex among some Western and Ukrainian observers and politicians. Once Russia tries to restrict Ukraine’s or the West’s choices by warning of dire consequences, we must insist that Moscow has no right to do so, this story goes – Ukraine is a sovereign state and it will do what is in its own interest, and that is to join NATO.

That is a deliberately naïve argument. There are very few states, if any, that are not constrained in their choices by their location, resources, and, last but not least, other states. Sovereignty is important, but its reality is complicated, not only for Ukraine. Yet there is something even more flawed about this line of thinking: Namely, that it still defines what Ukraine should do dependent on what Russia wants – only, as it were, the other way around: If Moscow says, “you cannot,” then we surely must!

What gets lost is the simple question of what it actually is that is in Ukraine’s interests with respect to NATO. Obviously, Russia should play a role in thinking about that question, but as one important factor to be considered and not as a sort of foil against which to prove one’s unshakable commitment to Ukrainian sovereignty. In that sense, ironically, what Ukraine’s elites and its Western supporters need to do is set aside for a moment what Moscow wants and says in order to focus instead on a truly open-ended exploration of what Ukraine needs.

Such an approach may produce more than one result. But, as a minimum, there is a solid case for being against NATO membership for Ukraine, in Ukraine’s very own interests. Moreover, it takes not only Ukraine’s will for Ukraine to join NATO, but also, and even more so, that of the current members of NATO. Here, too, a closer look shows that it is not in their interests or that of NATO as a whole to admit Ukraine.

We have robust evidence on what ordinary Ukrainians think about the possibility of NATO membership. According to reliable polls, in July 2019, 53% of Ukrainians were in favor of it, while 29% were against, and 14% undecided. In November 2020, 41% were in favor of NATO membership, 37.1% preferred neutrality, and 13% would have liked their country to join the Collective Security Treaty Organization, an alliance with Russia and other states. This past June, 54% of Ukrainians supported NATO membership, while 31% opposed it, and 15% were undecided.

What these figures show us is that there is a fairly stable but not overwhelming majority in favor of membership, and a large and also fairly stable minority against it. Unsurprisingly, such polls are regularly used for pro-NATO agitation, along the lines of “see, if there were a national referendum tomorrow, the majority would vote to join the bloc.”

Yet that is a biased oversimplification, for three reasons. First, Ukrainian politicians have a bad habit of giving their voters the false impression that somehow such a referendum would settle the issue, or at least have substantial influence. But in reality, NATO is, in essence, a mutual-security club where current members agree, or not, to admit new ones. It is in Ukraine’s power to ask for admission, but not to force its way in. It would be good – and honest – if Ukraine’s leaders, both in politics and the media, explained this more often and without demagoguery.

Second, majorities are important, but they are not infallible (see the British Brexit debacle) or necessarily a good way to decide highly polarizing issues. In this case, a responsible Ukrainian politician would have to ask: Is it really a good idea to force a sizable minority of between a third and two-fifths of the population to go along on such a polarizing issue? Especially in a country that has plenty of other unresolved issues and recent experience with popular uprisings as well as separatism? (And yes, the separatism is genuine. It may not have survived without Russian support, but it is not merely a front either.)

Third, the polarizing potential of Ukraine’s NATO question becomes even clearer as soon as you ask not only how many Ukrainians want in or not, but where they are: On NATO membership, also robust polls show that, for instance, the Lvov and Ivano-Frankivsk regions in Ukraine’s far west display majorities of about 80% in favor, while the Odessa region in the south, and the Kharkov region in the east have solid majorities of about 55% against and only a third for. These are not outliers but markers of a clear pattern, as a look at the useful data of the recent Ukrainian project ‘Generation of Independence’ reveals.

Among younger Ukrainians, sympathy for NATO is generally higher, it’s true. But at least for now, a policy of joining NATO encounters substantial opposition and has the potential to bring out regional differences in a disuniting manner. And all that – see above – to pursue an end that Ukraine may have no realistic chances of achieving, at least not any time soon.

In fact, tying Ukraine’s vital need for reform to the goal of NATO membership – or, for that matter, full EU membership – is a trap. What if these memberships are a long way off or never arrive at all? Should the nation abandon reform? Clearly, Ukraine is better off keeping a clear distinction in mind: It needs reform, whatever membership it obtains or doesn’t obtain. In that respect, it is a particular pity that NATO, in its current, overly ideologized shape, positively encourages this misguided linkage, as you can easily see with a quick glance at its website. There we learn that, apart from the obvious fields of security and defense, NATO is also busy encouraging “the reform process” in general, including such aims as democracy, the rule of law, human rights, and the market economy. What could go wrong? This: The reward may never come. And what will that do to the image of reform, especially if it requires sacrifices from many Ukrainians?

And what about NATO’s current members and the bloc as a whole? Here, the issue is, in essence, one of potentially crippling overload. Zelensky may exaggerate and argue that Ukraine’s military can make an important contribution to NATO’s overall security. Be that as it may, the reality is much more complicated. Because the key question is not how much manpower, fighting experience, morale and so on Ukraine could add to the alliance. The real issue is whether that outweighs two serious risks, not for Ukraine, but for current NATO members: Escalating conflict with Russia and destroying NATO from within.

Why that is so, is easy to see with regard to Russia. Even a proxy war with it would be devastating, no matter who won. It would be particularly catastrophic for NATO’s European members. Which brings us to the serious risk of destruction by overload: Would Germany and France, for instance, really fight Russia in and over Ukraine? Yet if Ukraine were a NATO member, the bloc’s structure means they would have to, in the case of an explicit Russian-Ukrainian war.

It’s true that even NATO’s famous Article 5, which demands that every member help defend every other, could be fudged. But that’s not the point. Once tested, fudged, and de facto disregarded, Article 5 would be discredited and, with it, NATO as a whole. Admitting Ukraine could open a path to exactly that outcome. You may not like that fact; you may pretend that it’s cynical to point it out. Yet Ukraine has real potential to be a poison pill for the bloc.

What about Ukraine’s security then? While, in practice, probably no state actually enjoys total, unadulterated sovereignty, security is a more down-to-earth thing. And Ukrainians have a right to it as much as anyone else. In that respect, another polling result is important: When asked to identify threats to Ukraine, 74% of respondents point to Russia and 72% to “external aggression” in general.

Russian politicians might not like this evidence, or choose to believe that they, their actions, and their words have nothing to do with it. But that would be a serious mistake. The key fact is that this perception now exists. Arguing about who is to blame is fruitless. Hence, while it is actually useful that Russia is clear about its red lines, its elites, both political and cultural, also need to finally figure out a way to reduce instead of increase distrust among Ukrainians.

That in itself won’t be the solution to the core problem of how to provide both Ukraine and Russia with a sense of security and stability in a way that both states find acceptable. But it is a precondition of any such solution.