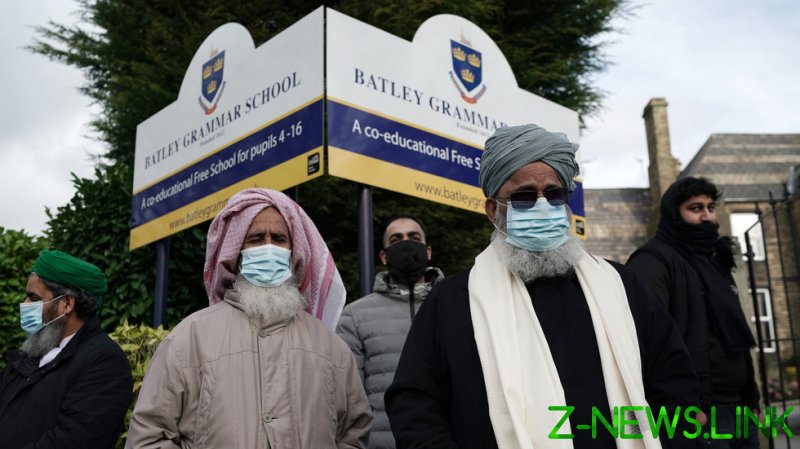 An angry mob gathers outside a school to demand the sacking of a teacher who’d shown his class a picture of the Prophet Mohammed. There is chanting and a Muslim scholar addresses the crowd. The police are called and they try to get people to disperse.

Such a scene immediately brings to mind the events that took place outside a school in a Parisian suburb just five months ago. Tragically, on that occasion, protests led to the horrific beheading of teacher Samuel Paty at the hands of an Islamic extremist. This time around, it is not a French lycée, but a Yorkshire grammar school that is in the eye of the storm.

What happened to Samuel Paty should have taught school leaders one very clear lesson: it is absolutely vital to defend teachers against mob rule. No one – neither pupil nor parent – has the right not to be offended by the school curriculum. Crucially, this extends to Muslim pupils and parents who may be offended by the way that Islam is taught or discussed in school classrooms.

We do not have blasphemy laws in the UK. Teachers are free to show pictures of Mohammed if they deem this appropriate for their lessons. The rights of teachers to exercise their own professional judgement in the classroom must be defended.

Shamefully, this is not what has happened this week. When members of the local Muslim community gathered outside Batley Grammar School in West Yorkshire yesterday, the school’s headmaster did not defend his Religious Studies teacher. The exact opposite occurred. Head teacher Gary Kibble issued a “sincere” and “unequivocal” apology for what had happened and declared that the teacher concerned had been suspended pending an investigation.

Showing the picture had been “completely inappropriate,” the headmaster said, because it “had the capacity to cause great offence to members of our school community”. In response, he announced, teaching materials had been changed and the lesson concerned removed from the curriculum.

This is a shocking act of cowardice. If teachers are to be suspended simply for causing offence, then the profession will be rapidly depleted. What about teachers who run classes in sex education and teach about homosexuality, transgender identities and abortion? Plenty of parents find the content of such lessons offensive, but schools make clear that it is teachers who determine the content of the curriculum.

Not, it seems, at Batley Grammar. There, the head teacher has announced a further ‘audit’ of learning tools. In a televised address, Mr Kibble acknowledged, “It is important for children to learn about faiths and beliefs, but this must be done in a respectful, sensitive way. The school is working closely with our governing body and community leaders to help us resolve this situation, and we continue to do so.”

Let’s translate this statement. ‘Community leaders’ does not mean all parents but key figures from the local Muslim population. It is the imams and muftis, the Muslim clerics and scholars, who will be invited into the school to pass judgement on the religious education curriculum and the future of the teacher who showed the picture of Mohammed.

What’s being overlooked in the rush to placate these people is that only a tiny proportion of the school’s parents gathered to protest. Indeed, press reports show that many of those who spent the day outside the school were not actually parents at all. In suspending his member of staff and issuing an unreserved apology, Mr Kibble is acquiescing to Islamic extremists and activists, not regular Muslim parents.

We now need to ask: who exactly is running Batley Grammar School? Because it doesn’t seem to be Mr Kibble at all. Local Muslim scholar Mufti Mohammed Amin Pandor, told yesterday’s protesters that the school had, “prepared a statement and we weren’t happy with the statement, so we said no, the statement needs to be worded in this way.”

But schools are not madrassas and staffing and curricular decisions should not be handed over to those who shout loudest or are most easily offended. Indeed, schools should be places where children learn the value of free speech and open debate, where they learn to engage with ideas they find offensive and tolerate people they disagree with. Sadly, at Batley Grammar, a school with a proud 400-year history, pupils are not learning these valuable lessons. Instead, they are being taught that you should be intolerant and demand censorship if others offend you.

It is shocking that the suspended teacher now needs police protection. Yet there have been no statements in his defence from the heads of Britain’s teaching unions. The Education Secretary Gavin Williamson has said that Thursday’s protests were “completely unacceptable” and that teachers should be free to expose pupils to “challenging or controversial” issues. This is to be welcomed. But it is now vital that we all come together in an unequivocal display of support for Batley Grammar’s religious education teacher.

Rather than apologising and acquiescing to bullies within the Muslim community, we need a display of solidarity with the suspended teacher. Following the beheading of Samuel Paty, the French rallied behind the slogan #JeSuisProf. We now need this spirit here too.