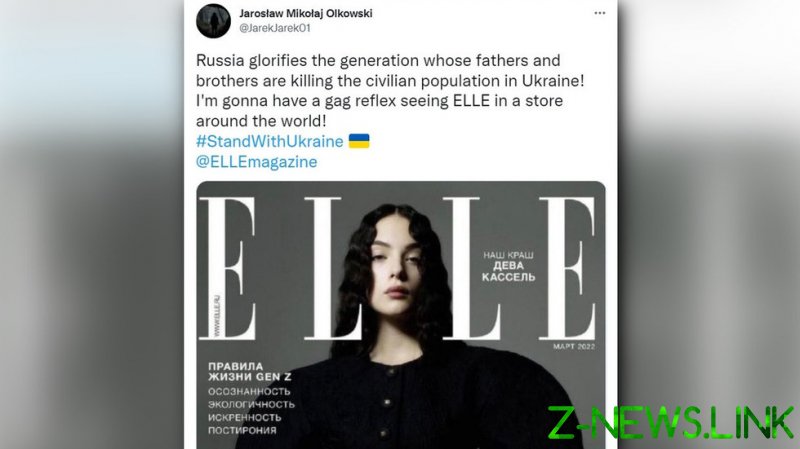 Elle USA stated on Tuesday that it has disavowed all links with its Russian sister company after supporters of the Ukrainian cause accused the Russian magazine of secretly supporting the ongoing military action against Ukraine. The issue centers on a headline about Gen Z.

The American magazine said it “terminated its publishing partnership in Russia” and urged readers to learn how they can “support the people of Ukraine right now,” in a statement on Instagram (a platform owned by Meta, which is deemed an extremist entity in Russia). The statement was released due to “recent social media activity.”

The magazine was apparently responding to negative reactions to the cover of the March issue of Elle Russia. It features a photo of Deva Cassel and several headlines, including one that reads: ‘Life rules for Gen Z: conscience, environmentalism, honesty, post-irony’. Another at the bottom says: ‘Generation Z, make the world great again’.

Critics, led by Ukrainian fashion designer Mary Furtas, found the letter ‘Z’ problematic, and demanded comments from Hearst, the owner of the Elle brand. The American holding had a stake in the Russian publisher of Elle, Hearst Shkulev Group, but pulled out over the Ukraine conflict.

The Russian military marks some of the hardware used in the Ukraine offensive with the letter ‘Z’. In Russia, it has become a symbol of support for the government and the military in the face of Western attempts to punish Russia for what Kiev and its backers consider an act of unprovoked aggression. Russia’s latest space rocket, the Soyuz-2.1a, had ‘Z’ emblazoned on its payload fairing during a launch on Tuesday.

Some who condemn the country for attacking the neighboring state claim the letter is now nothing short of the Nazi swastika.

Elle Russia made a comment on social media addressing the conflict in Ukraine – on February 27, it posted the word ‘peace’ in 25 languages, saying this will “help you explain your stance to pretty much any person on the planet.” The word sounds the same in Russian and Ukrainian, the post added.

Western branches of Elle have supported the Ukrainian cause by highlighting the struggles of their colleagues working there.

In a recent interview, Elle Ukraine’s editor-in-chief, Sonya Zabouga, said she writes her Instagram posts in English these days “so foreigners can understand what’s going on.” The journalist has been calling on Western fashion houses to boycott the Russian market.