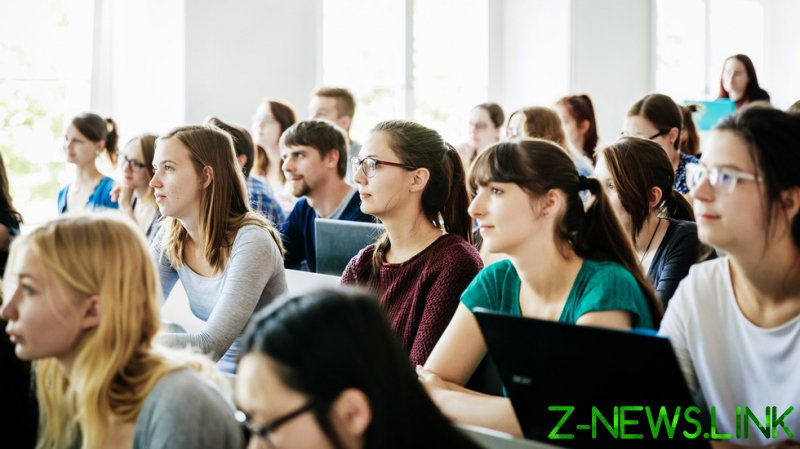 Instead of gender studies and ways to weaken the language to the point where it’s so soft it can never give offence, how about we teach young people how to lay bricks, hammer a nail, wield a chisel or plaster a wall?

Imagine if an old-fashioned war broke out tomorrow and the country had no choice but to call up the snowflake youth of today? Back in World Wars I and II, it fell to the working man to come to the rescue and defeat the Germans.

There’d be no chance now, the descendants of those hardened working men turned warriors are all at woke universities learning how to admire their own belly buttons.

Even the cops are at it now. The College of Policing has urged Priti Patel, the UK Home Secretary, to send new officers out on duty armed with a… degree. All new recruits would be required to have been to university or join a three-year apprenticeship and crack the books in the classroom for at least one of those years.

Err, why? What for? Maybe I’m being a bit thick and missing a vital element here, but why does a police officer need to have a degree in order to make an arrest or pull over a car for speeding? Even the incoming chair of the Association of Police and Crime Commissioners, Marc Jones, thinks it’s a dumb idea, especially as it would deter more experienced people – such as ex-soldiers – from joining.

He illustrated his point in an interview with the Sunday Telegraph: “An officer said to me: ‘At 2.30am in the morning when it’s kicking off outside of a nightclub, and I’m about to get out of the car, I would rather the person next to me had done four years in the Army, than had got a 2:1 in expressive dance.’”

Well, exactly. And what does university actually train anybody to DO anyway? Most young people don’t go on to become a doctor or dentist, they leave uni with a degree in Something Utterly Pointless (SUP) such as media studies or community development.

Then there are the ‘Mickey Mouse Degrees’ – there really are people in this world with ‘David Beckham Studies’ on their CV, a degree module once offered by Staffordshire University. If you’re not an influencer or some kind of celebrity what use is that ever gonna do you or anybody else, aside from David Beckham?

The University of Reading takes the woke biscuit for the most bonkers idea in the last week or so, oh but don’t worry – there will be something equally as idiotic soon enough. Lecturers were told to issue ‘trigger warnings’ to students if classes contain ‘distressing’ content.

There is a list of 22 of these ‘triggers’ but that number is sure to grow. They include anything to do with things like pregnancy, heterosexism and classism. Sexual assault, incest, animal cruelty, mental illness, racism, sexism and misogyny, plus homophobia are on there too. These topics might spark ‘unwelcome memories’ for any student who might have had traumatic experiences… and avoiding these subjects helps them? How?

“A menacing shadow of wokeism and political correctness has fallen across our schools and universities,” Chris McGovern, from the Campaign for Real Education, told the Daily Mail. “We are descending into an educational Dark Age. Universities are not doing their students any favours at all by insisting that they be protected from reality.”

These youngsters spend three years absorbing this tosh and being mollycoddled and trained how to never – EVER! – give offence, then what? What are they going to do in the workplace with all this useless information?

Oh, there’s loads of work out there for them, loads! There’s a vast industry out there all built on woke doctrine and policed by perpetually melting snowflakes, and it’s getting bigger every day.

They can get a job at the National Trust, maybe, making sure the charity’s army of volunteers goes on unconscious bias training, or take on the vital task of informing the world that the author Enid Blyton was racist and xenophobic.

If I was King Woke, I’d suggest the creation of a new branch of the police force; the pronoun police. Just think of the fun they could have, walking up and down the aisles on trains, into bars and football stadia and suchlike – slapping fines on people for using ‘him’ or ‘her’ incorrectly.

Or how about reviewing old films and seeing if they’re a little bit scarier than their classification? These freshly anointed graduates are all a wee bit squeamish and they need to protect the generations coming up behind them.

Classic films such as Rocky, Star Wars and Flash Gordon have been given higher classifications by the British Board of Film Classification because they may be a little bit more scary to the snowflake generation than they were to the generation before. Aw, didums. That Darth Vader, he’s so macho and nasty with his phallic red light sabre, isn’t he?

Hey wokeys, why not just ban these flicks outright? You know you want to.

Well, this is what we get. This is the fruit of recent education policy. Graduates all have to graduate towards something. I blame that Tony Blair bloke. When he was elected as Prime Minister in 1997 he set a target for half of all young adults to attend university.

That goal was reached a couple of years ago… where do you think all this wokeist and snowflake nonsense comes from? It’s navel-gazing, transferred from the classroom to the workplace and now we’re all suffering the consequences.