Home / WORLD / ‘Let’s go Brandon’ is more than just a funny anti-Biden meme. It empowers Americans against the ‘fact-checkers’ and censors 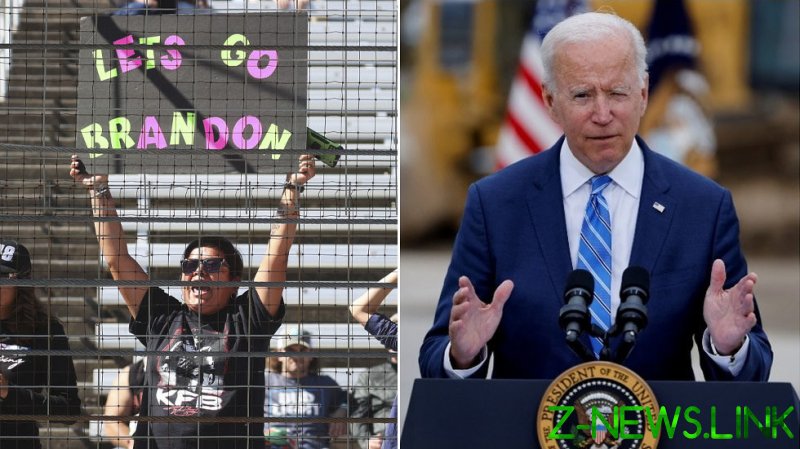 Despite being blessed with a First Amendment, and a vast array of social media platforms at their disposal, Americans are finding it increasingly necessary to self-censor their personal views and opinions. This wave of oppression is crashing across the country when there is so much up for debate and discussion.

From Joe Biden’s fiercely controversial vaccine regime, which threatens to make hundreds of thousands of Americans unemployed, to the stark reality of dangerous breaks in the supply chain, as evident by worrying reports of empty store shelves, the undercurrent of anger and frustration is palpable. Yet the media continues to carry water for the Biden administration. That’s why the ‘Let’s go Brandon’ meme is not as mundane as it may first appear; it represents something of a breakthrough moment against establishment bias, deceptiveness and outright censorship.

The epic moment in meme history came as NBC reporter Kelli Stavast was attempting to interview Brandon Brown, winner of a NASCAR race in Talladega, Alabama. Suddenly the fans, with more on their mind these days than just cold beer and fast cars, erupted in a political chant that has been increasingly heard at stadiums around the nation. That in itself is a worrying trend since it suggests that the ‘bread and circus’ routine is no longer distracting the masses from political matters as intended. In any case, whether the reporter genuinely misheard the audience or was playing cover for the White House, we may never know. But when she wrongly reported that the fans were chanting ‘Let’s Go Brandon’ instead of ‘F**k Joe Biden’, a meme was born.

Not only is the chant becoming a regular rallying call at sporting events nationwide, but a musical rendition by the rapper Lola Alexander is now sitting astride the iTunes hip-hop charts. The popularity of the song is testimony to just how unpopular the US president has become, and – considering that a large portion of the iTunes and Spotify market comprises teenagers – not least of all among the youth.

It must certainly perplex political strategists to no end that a simple three-word meme has placed the Democratic Party in an unenviable bind, and one that is largely beyond its power to escape. An astroturf movement is growing against the Biden administration to the point that the legacy media – perennial defenders of the Democratic Party regardless of the degenerate in power – finds itself not only helpless to censor it, but in a position where they are actually being used to disseminate that critical message.

Unless the major broadcasting companies stop providing live coverage of sporting events altogether, the hilarious anti-Biden chant ‘Let’s go Brandon’ will find its way into millions of American living rooms absolutely free of charge. Considering what commercials cost to run these days, that is no small consideration. Here the Democratic Party and their fawning media allies are learning a lesson that is older than Rome: try as they may, the powers-that-be will never be able to stifle public sentiments for unpopular leaders. Nor should they.

The public expression of disapproval for their rulers and their policies serves as a safety release valve that any reasonable government should welcome. Censoring public opinion, as the social media companies recklessly do under the guise of ‘community guidelines’, while continuing to run defense for one party is a recipe for a political disaster that will make the January 6 ‘insurrection’ look like an afternoon tea party.

This is where memes appear on the US political stage as more than just snark-bombs lobbed into the opponent’s camp for cheap laughs. In these days of political correctness gone bananas, people must constantly weigh their every word for its potential offensiveness. Will this Facebook post hurt somebody’s feelings? Will this Twitter message be interpreted the wrong way and get me canceled from polite society? Will I be accused of committing a hate crime? Will I lose my job? Never before has freedom of speech, struggling for relevance in an age of virtue signaling gone mad, come replete with so many hidden trapdoors and pitfalls.

The genius of the ‘Let’s go Brandon’ meme, brought to life thanks to an act of deceptiveness on the part of the media, is that it says everything that needs to be said without actually saying it. It isn’t subjecting anyone to the unpredictable whims of the PC thought police. It is a phrase that is immune to the fussiness of the fact-checkers and the sensitivities of the censors. And unlike Pepe the Frog of 4chan fame, or the forever morphing NPC Wojak, ‘Let’s go Brandon’ is not a symbol that can be attached to some undesirable alt-right movement, like white supremacists, for example. It is simply a phrase, started accidentally on the AstroTurf of dreams, which encapsulates the mood of a nation that presently finds itself stuck at one of the most dangerous junctures in its history. US leaders should heed the message as the desperate wakeup call that it is.