Home / WORLD / ‘Let this be the end of it’: Assange supporters hail judge’s surprise refusal to extradite WikiLeaks founder

‘Let this be the end of it’: Assange supporters hail judge’s surprise refusal to extradite WikiLeaks founder 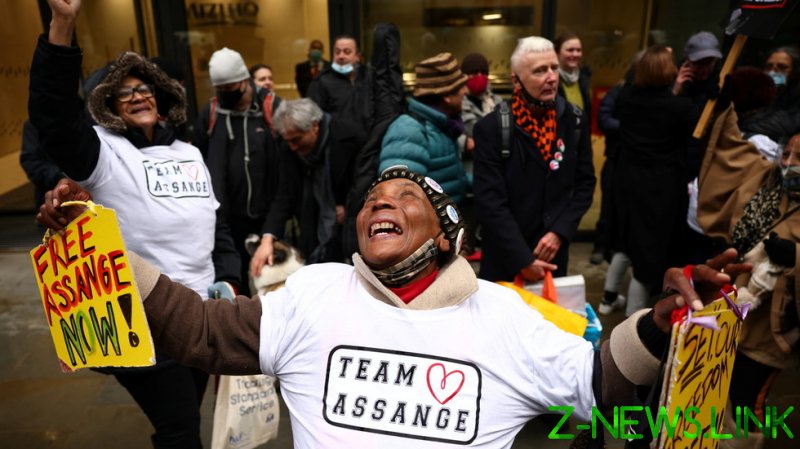 Assange, 49, is charged with 18 counts of conspiring to hack US government computers and the publication of confidential military records, including a video of a 2007 Apache helicopter attack in Baghdad. A dozen people, including two Reuters journalists, were killed in that attack. In a surprise ruling on Monday, Judge Vanessa Baraitser refused to extradite Assange to the US, on the grounds that inhumane conditions in an American prison could drive him to suicide.

As crowds embraced outside London’s Old Bailey, Judge Baraitser’s decision was cheered online by free speech activists and Assange’s supporters. NSA Whistleblower Edward Snowden, who has also been charged with espionage for revealing the agency’s massive domestic spying operation, tweeted, “Let this be the end of it.”

Journalist and filmmaker John Pilger – a vocal advocate for Assange – cheered the decision, but called Baraitser’s focus on the suicide risk rather than Assange’s right to publish incriminating information a “face-saving cover” by British authorities to “justify their disgraceful political trial.”

Baraitser did not question the legitimacy of the charges against Assange, and even asserted that freedom-of-speech rights do not provide “unfettered discretion” to publish as one sees fit. A number of prominent pundits and activists echoed Pilger’s sentiment, with journalist Glenn Greenwald declaring that “this wasn’t a victory for press freedom,” but “an indictment of the insanely oppressive US prison system.”

Still, the chance that Assange may soon see freedom was cause for celebration alone. Figures on all sides of the political spectrum joined in, with Labour Party MP Diane Abbott, contrarian pundit Peter Hitchens, and former MP George Galloway among those celebrating. Former Labour Party leader Jeremy Corbyn tweeted that “extradition would be an attack on press freedom.”

Assange’s legal team has said the US will likely appeal Baraitser’s verdict in London’s High Court, with the possibility it may be taken as far as the UK’s Supreme Court. Following the verdict, Assange returned to Belmarsh Prison, to await a bail hearing on Wednesday.

In the US, his supporters have pressed President Donald Trump to pardon him. Trump has given no indication thus far that he will. Nevertheless, Assange’s fiancée, Stella Moris, summed up the mood among many of his supporters. “Today is a victory for Julian,” she read from a statement outside the court. “Today’s victory is a first step towards justice in this case.”