Home / WORLD / Lehigh University RESCINDS honorary degree given to Trump in 1988, citing ‘violent assault on the foundations of our democracy’

Lehigh University RESCINDS honorary degree given to Trump in 1988, citing ‘violent assault on the foundations of our democracy’ 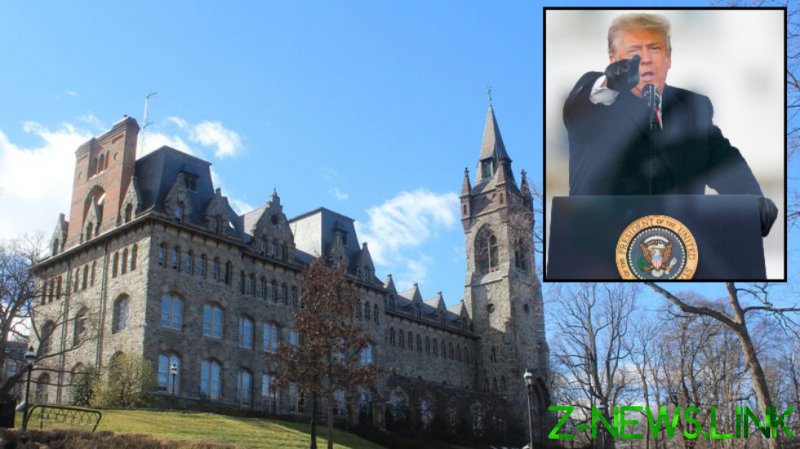 The executive committee of Lehigh’s Board of Trustees voted on Thursday to rescind and revoke the honorary degree that was granted to Trump when he spoke at the $70,000-a-year private university’s commencement ceremony in 1988. With explicitly stating reasons for the decision, Lehigh suggested that Trump was at least partly to blame for Wednesday’s breach of the Capitol by violent protesters.

“Yesterday, we witnessed a violent assault on the foundations of our democracy – the abiding respect for the will of the people exercised in a free election and the peaceful transfer of power,” Lehigh President John Simon said in a statement.

The school, located in Bethlehem, Pennsylvania, had resisted previous calls for the honorary degree to be taken back. Most of Lehigh’s faculty voted in 2018 to revoke Trump’s degree – based on allegations that he had demeaned immigrants, women and political protesters – but the Board of Trustees rejected that demand. The board refused a previous push to cancel the degree in 2017, after Trump said that “both sides” were to blame for the violence that broke out at a protest in Charlottesville, Virginia.

A third petition was brought against Trump just last month by Lehigh’s diversity office, which accused the president of displaying “white supremacy.”

“After five years of pressure from our faculty, staff, students and alumni, the Lehigh Board of Trustees finally did the right thing and revoked Donald Trump’s honorary degree,” said Jeremy Littau, a journalism professor at Lehigh.

Trump’s honorary degree at Robert Gordon University in Scotland was revoked in 2015, after the then-candidate for president called for banning Muslims from entering the US until problems with Islamic hatred of Americans could be better understood. He still has honorary degrees from Virginia’s Liberty University and Wagner College in Staten Island.

Lehigh has some experience with taking back honorary degrees. The university gave an honorary degree to Bill Cosby in 1987, only to rescind it in 2015, saying the comedian’s behavior was “inconsistent with the character and high standards that honorary degree recipients are expected to exemplify.”