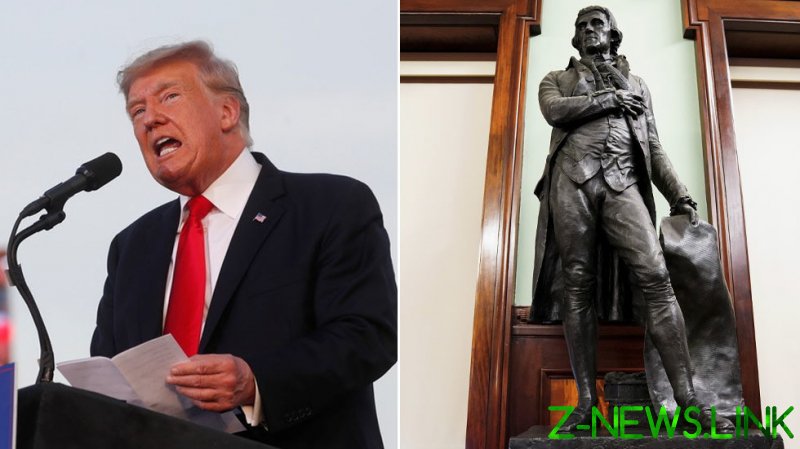 The former president reacted with an angry statement to the New York City council’s decision to remove the historic statue of Jefferson from the city hall. As Trump patted himself on the back for accurately predicting this outcome several years ago, he misrepresented a basic fact in the Founding Father’s biography. Jefferson, the statement said, was “a principal writer of the Constitution of the United States.”

Jefferson, in fact, was nothing of the kind. He served as ambassador to France in the second half of the 1780s and was restricted mostly to letters in his input on the keystone document of American statehood, which was being written back home at the time. He did, however, compose the draft of the Declaration of Independence a decade earlier. And he was a strong advocate for the Bill of Rights, as the first ten amendments to the US constitution are known.

The apparent gaffe was met with an avalanche of delight by Trump critics on social media. Some sarcastic users speculated on whether Jefferson’s “flight home from France was cancelled” due to the Continental Army capturing “the East Coast airports” – an apparent reference to another infamous Trump gaffe on historical facts.

Others suggested Trump should have paid more attention to the musical ‘Hamilton’ to avoid bungling statements about Founding Fathers.

Some more serious-minded commenters suspected the error was deliberate and meant to distract public attention from another recent statement by Trump, in which he commented on the death of Colin Powell. Many people found its tone self-aggrandizing and disrespectful to the late general.

The glee was tacitly endorsed by the Trump-critical mainstream media. Huffington Post said the politician was “taken to school” over the gaffe, while Newsweek said he “falsely claimed” Jefferson to be the author of the Constitution, seemingly implying it was more than merely a mistake.

The removal of the Jefferson statue from the city hall in New York City was approved by council members on Tuesday. The justification was exactly what Trump suggested in 2017 as he was berating iconoclast protesters: this Founding Father owned slaves.

Jefferson is also a suspected sex predator, particularly in relation one of the women at his property, Sally Hemings, who was 14 when their sexual relationship is believed to have started. He was consequently branded a “slaveholding pedophile” during the council meeting by one of the officials seeking the removal of his statue.

While much of the reaction to the council’s decision was shaped by Trump’s attitude, with people supporting or blasting it based on their partisan preferences, some lamented that the downsides of Jefferson’s character and personal history were now being used to overshadow his political legacy.

“Jefferson was a flawed human being, but his words are among the most inspiring, liberating, & consequential ever written,” author Christina Sommers tweeted.

The seven-feet-tall effigy is a painted plaster copy of the monument to Jefferson displayed at the US capitol. It was given to the city council in 1834 by Uriah Phillips Levy, a New York real-estate magnate, who’d commissioned the original work. The NYC version is now expected to be moved to the New-York Historical Society before the end of the year.