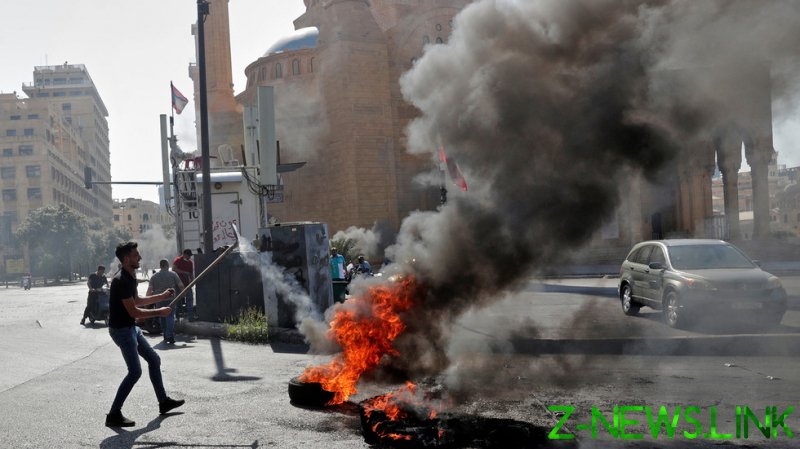 Lebanon’s caretaker Prime Minister Hassan Diab has warned the international community that the country could collapse in days, as even Israel offers aid fearing the expansion of Lebanese Hezbollah’s power in the country.

Without having a formal government, a 90% decrease in the value of the country’s currency and 55% of the population living in poverty, Lebanon is in a crisis like no other since the nation’s founding. And, as the country steers further into decline, so does the media coverage on Lebanon’s predicament and who is to blame.

Fears of a looming civil war have been constantly voiced from parties belonging to both of Lebanon’s major political blocs, the 14 March and 8 March alliances, pointing fingers as to who is really responsible for the economic mess.

“Lebanon is a few days away from the social explosion. The Lebanese are facing this dark fate alone,” Diab said in a speech to diplomats in Beirut. He has been serving in a caretaker capacity since resigning in the wake of the catastrophic Beirut port explosion last August. Since then, fractious sectarian politicians have been unable to agree on a new government.

It is well understood that Lebanon’s political class is corrupt and responsible for the country’s decline, along with wealthy elites from the Gulf and Western Banks. Yet, little is ever said about the impact of US and EU policies in the region and how they affect Lebanon, most specifically the sanctions on Syria, which was once a large trading partner to Lebanon but is now steeped in poverty itself.

Shortly after reports that Lebanon’s military was struggling to provide for its soldiers and the PM had put out a cry for help, Qatar jumped in to supply the Army with 70 tonnes of food per month. Little has been said so far to condemn this move in the Western press but I expect it will: when countries unfavourable to the West pledge help suddenly aid becomes an existential threat.

Interestingly, Israel’s Minister of Defence, Benny Gantz, formally offered humanitarian aid to Lebanon, through UNIFIL, the UN peacekeeping force in South Lebanon, stating that his “heart aches seeing the images of people going hungry on the streets of Lebanon,” as the alleged reason. Israel’s Channel 13 argues that instead of the impoverished people of Lebanon being the reason behind the offer, oil imports from Iran are “a matter of great concern for Israel” and that this is why. Gantz also stated on Twitter, that “considering Hezbollah’s attempts to deepen Iranian investments in the country,” he had made the call to go ahead with the aid offer.

“I want to stress that I promised and I’m still promising … if we have to go to Iran to get gasoline and fuel oil, we will, even if it causes a problem,” the Secretary General of Hezbollah, Seyyed Hassan Nasrallah, recently stated in a televised speech. The Israeli fear of Iranian oil tankers arriving to save Lebanon from some of its crises, is that it may empower the Lebanese Hezbollah, considered by Israel as a terrorist group and its fiercest foe.

According to Reuters, Lebanese Hezbollah has been readying itself for the possible implosion of the Lebanese state, issuing ration cards and working on delivering goods such as food and fuel to its constituents and beyond. The ‘Al-Sajjad’ ration cards, according to an alleged Hezbollah source quoted by France 24, can be used at cooperatives set up consisting of “Syrian, Iraqi and Iranian products”.

Hezbollah already operates multiple charities, a construction firm and pension system. There has been concern cited over the expansion of this support program by some analysts, and at the group’s ability to operate a “parallel economy”. The idea of local groups and militias providing for the Lebanese people dates back to the era of the 1975-1990 civil war, where the state did not play a predominant role in providing for its populace.

But the way this is presented by Western mainstream media outlets, paints a biased picture against Hezbollah, rather than putting the situation in its proper context. The reality is, that many people are living off the support they get from Hezbollah, out of necessity, and it does not serve as evidence of ill intent. Rather it indicates that the party has simply done charitable work.

Now, is it a reasonable assumption that Hezbollah may gain from what it is doing? Absolutely, but, this is what any political party with the capability would do given the financial crisis. If it is a strategic threat for Israel for Hebollah to feed hungry Lebanese, and to have further Iranian and Hezbollah influence throughout the country, then this should just be stated. Instead, they claim that Hezbollah is the reason behind all of Lebanon’s woes and is somehow responsible for a political system set up prior to its involvement in politics altogether, but these smears bear no weight.

Allegations have been made by Western think-tanks, like Chatham House, which paint a picture in which Hezbollah essentially controls the Lebanese state from behind closed doors, and participates actively in drug trafficking and dealing. The evidence presented for this? You guessed it: none whatsoever, but it is completely fine for that to be printed throughout Western media as if it is gospel. Not only is this misleading to quote baseless claims like these, but it is outright lying when not even Hezbollah’s greatest enemies have produced a shred of tangible evidence.

Lebanese Hezbollah is a real strategic threat to Israel; it possesses an arsenal of weapons capable of delivering a potentially fatal blow to any military facility they choose. This is the West’s real problem with the group, along with its frustration about the group’s involvement in Syria on the side of the Assad government, as well as its historic victories over Israel’s military.

The utter hypocrisy of the Israeli or US governments claiming to care about Lebanese civilians, after killing tens of thousands of them through direct warfare and imposing brutal sanctions on them, is astounding.