Leave out London & pack Paris in! Thriving metropolises like Moscow or Dubai now offer far more for a post-coronavirus getaway 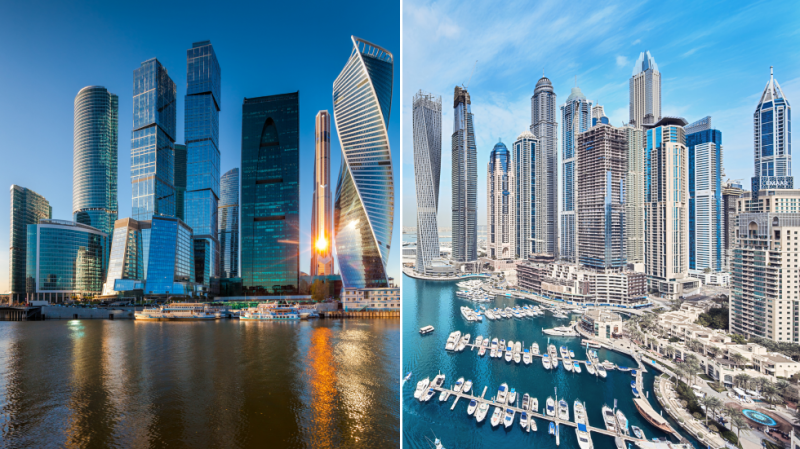 When you grow up in Dubai, you don’t worry about security. You can walk the streets past midnight without fear of getting harassed, you can leave your bags unattended at restaurants without fear of them getting robbed, and you can even drop your wallet and rest assured someone will pick it up and give it back to you. Don’t believe me? There are at least five social experiments on YouTube proving just that.

It comes as no surprise, then, that the UAE’s crime rate is among the lowest in the world, according to official figures. But how much more proof do you need than someone who was born and raised in the country?

That is why when I flew to Moscow on my own for the first time in March, I was worried. Growing up to a Middle Eastern father and a Russian mother, I longed to visit my maternal homeland. Yet I feared what I would experience in the city described by mainstream Western media as filled with gangs, drugs and predators.

After all, I had travelled to what are frequently cited as Europe’s greatest cities, like London, Rome and Paris, and experienced just that.

My memorable front-row experience at the Yves Saint Laurent fashion show under the Eiffel Tower was tainted by a stranger who stalked me afterwards, my London business trip was defined by one colleague being robbed, while another was assaulted while jogging in broad daylight. My much-anticipated holiday in Rome had me clutching for my purse for fear of pickpockets instead of enjoying my pizza carefree.

To my pleasant surprise, I experienced none of that in Moscow. In fact, the Russian capital reminded me so much of Dubai that I felt I was home – not to mention that the skyscrapers, the brightly-lit streets, the mega shopping malls, the high end cafes and the designer fashion brands all reminded me of Dubai’s own cosmopolitan look.

Some of you won’t be surprised.

“It felt safer than London,” one of my former colleagues told me after attending the 2018 FIFA World Cup in Moscow. “There were police everywhere,” another expressed. “Everyone was so friendly,” another one said. After spending almost two weeks in the city, I found myself saying the exact same thing.

Just as Dubai’s success as a touristic destination and home to nearly two million expatriate residents is credited to its outstanding law enforcement, so should Moscow be recognised for its security. The numbers don’t lie, as crime rates in Moscow hit a record low in 2018, according to state-owned agency TASS, and police seem to maintain a presence everywhere around the city, from shopping malls to parks.

Speaking of the outdoors, in case you were wondering, Moscow isn’t freezing cold all year round, as Westerners often insists on implying. Right now, the temperature is as high as 33 degrees Celsius, with the city having experienced its second hottest June in history this year. Plus, in the centre at least, you don’t have the kind of dust and dirt you encounter elsewhere in Europe. Let’s be honest, the Champs-Élysées could really use some cleaning, while the main streets of Moscow and Dubai share one very important factor: cleanliness.

Another similarity with Dubai that you won’t see on any Western news channel? Russians love tourists, because they’re intrigued by foreigners, who don’t visit as often as they do in other major European cities.

When I was standing in line at a restaurant with an English friend, it seemed as though all the locals around us were fascinated by our backgrounds. “We love your English accent,” they told him, while they were even more intrigued by me speaking three different languages.

The hotel service, unlike that in other European destinations, was so exceptional that it can only be compared to Dubai’s. Unlike rude staff in Paris who wouldn’t keep room service open a minute past closing time, or dusty rooms in a supposed five-star hotel in Rome, or snobby receptionists in London, the Russians were accommodating to my every request.

Dare I say that it may even have an advantage over Dubai, where the majority of service staff are expats, while in Moscow, they’re mostly Russian. Which got me thinking that perhaps Moscow is a great touristic destination because it has had to try ten times harder to be one, thanks to constant negative news coverage in Western media, while other European cities have had it easy – they practically sell themselves.

And if you think Dubai has magnificent restaurant and bar concepts, wait until you try Moscow’s. Speakeasy bars are plenty, nightclubs are buzzing with hip hop music, and the hookah lounges? You’ll only get every flavour you’ve ever dreamed of. The best part is that unlike in other European cities, service at even the best of places in Moscow is not conditional and based on who you are. You get treated the same, whether you know someone who knows someone or you’ve just stepped off the plane for the first time.

So it is no wonder Russia is ranked the fourth highest performing tourism market for the UAE, according to Dubai Tourism, while the number of Russian residents in Dubai increased by nearly 200% from 2018 to 2020, according to figures by the city’s General Directorate of Residency and Foreign Affairs. In turn, Russia exempted UAE citizens from pre-entry visa requirements in 2019, leading it to become one of the most popular destinations for UAE residents, according to travel industry experts.

Moreover, the countries’ non-oil bilateral trade was estimated at $3.7 billion in 2019, a large portion of which came from Dubai’s food imports from Russia, which topped $305 million in the same year, while Dubai’s food exports to the federation totalled $114 million, according to government statistics.

And that’s just a small piece of the potential business pie between the UAE and Russia. Imagine if Dubai residents began looking to Moscow for a getaway instead of London or Paris. You don’t have to imagine. I can tell you right now that in these supposedly spectacular European cities, you’ll be treated like a foreigner, whereas in Moscow, you’ll be treated like a guest.