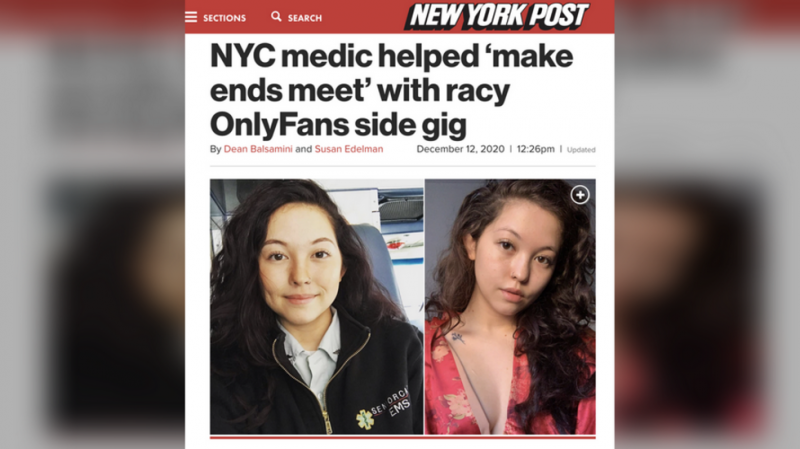 In the article headlined “NYC medic helped ‘make ends meet’ with racy OnlyFans side gig,” the Post exposed the medic’s identity by using her photo as the featured image and naming her despite her requests to remain anonymous.

OnlyFans, a popular subscription service, allows people to make money often by posting explicit photographs and videos of themselves for paid subscribers.

The newspaper also detailed the exact type of content that the medic, Lauren Caitlyn Kwei, was posting on her OnlyFans account, before pointing out that her employer, SeniorCare, prohibits “inappropriate conduct, on and off duty.”

Astonishingly, the New York Post even reached out to her employer for comment on the story, putting the woman at risk of losing her job amid the coronavirus pandemic.

In a public statement, Kwei wrote that she “begged” the reporter behind the story “to remain anonymous,” and “told him my safety and job were going to be at risk if he posted this article.”

“He truly did not care. He went on to call my employer and my mother,” she revealed, adding that she would soon find out whether she still has a job.

A GoFundMe fundraiser launched for Kwei – after her father recently suffered a cardiac arrest — has raised over $18,000.

As to why she chose to open an OnlyFans account instead of picking up extra shifts as a medic, Kwei explained in her statement that she “didn’t pick up extra shifts because I cannot work 40+ hour weeks and maintain my mental health.”

Kwei also says that she did “nothing wrong” and “will not take this lying down,” declaring, “I will continue to fight for my name and reputation. I will speak out against this and tell my story in time and when I am ready.”

Ocasio-Cortez’s comment was echoed by the Intercept’s Ryan Grim, who wrote, “Barbaric country. Jobs like this should pay enough that you don’t need a second one.”

Others called the piece “the opposite of holding power to account,” and the “worst kind” of cancel culture “since it targets a person whose life is completely irrelevant to the public.”