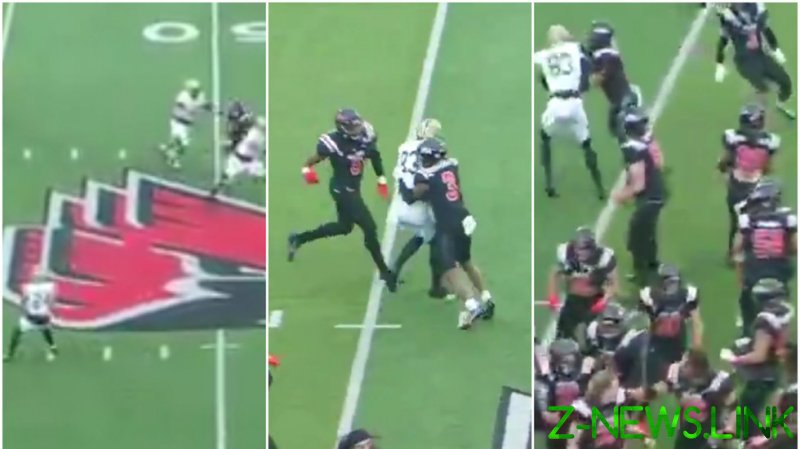 Footage of the chaotic climax to the clash between Western Michigan and Ball State racked up more than two million views in less than 24 hours as followers tried to make sense of the stampede that spilled across the turf in the final allocated seconds of the showdown.

After Ball State decided they had secured the recovery needed to seal victory by a slender 30-27 margin, their excited crowd raced onto the pitch to congratulate the players on the field and celebrate a place in the conference title game.

At least one of their players was dramatically dumped to the ground in the ensuing calamity, featuring Western Michigan players weaving in and out of crowds as they desperately tried to reach the end zone.

Stunned commentators watched their indefatigable efforts to score the points that would have given them an unlikely win, with many suggesting that they had haphazardly hurled the ball around like a hot potato as they ultimately completed a bizarre touchdown.

Viewers who were desperate for a dramatic ending were drowned out by cynics as the clip circulated, sardonically pointing out that the brazenly rule-breaking shot at glory had featured at least one forward pass.

While many picked out their favourite incident around the field as the bewildering action unfolded, purists were notably less enthralled.

“The game should have been ended the second the referee threw a flag for an illegal forward pass,” argued one. “Letting the play go after that is just asking for someone to get hurt.”

Accompanying their response with a series of clown emojis, another seethed: “May every player who ran onto the field before the whistle be forever shamed when this play inevitably airs for decades.

“You aren’t the marching band – zero excuse, learn some discipline.”

Despite their disgrace among some, the misplaced melee continued to provide compelling viewing for others.

“So a team can just run out onto the field while the ball is still in play and not be penalized for it?” asked one observer, while another pointed out a player who had been “absolutely decked” without anyone “saying jack sh*t”.

“May as well do that on every single down, then. What a joke. Kudos to Michigan for an absolutely entertaining highlight reel play for the ages.”