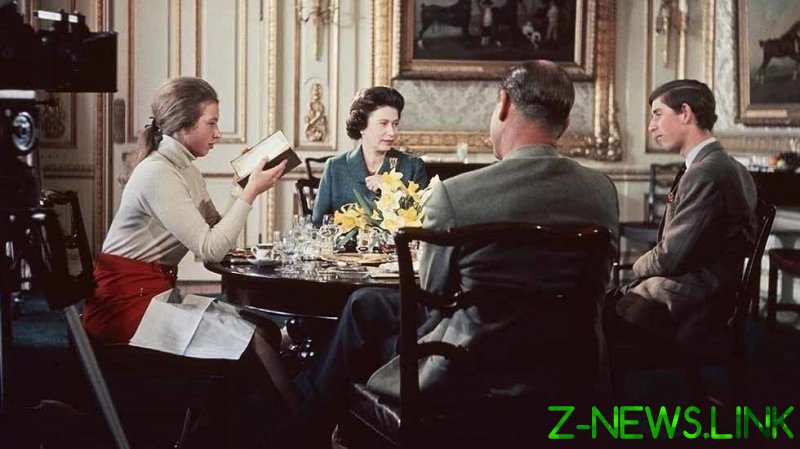 Royal Family, the 1969 fly-on-the-wall BBC documentary that chronicled a year in the life of Queen Elizabeth II and the royal family – which the Queen banned in 1972 for ‘cheapening’ the royals by ‘removing their mystique’ – recently resurfaced briefly on YouTube and has caused much consternation at Buckingham Palace.

Both Buckingham Palace and the BBC wanted the film to remain under wraps and so YouTube removed it for copyright infringement. Prior to the leak on YouTube, the documentary had also been brought back into the public’s attention this past year by the hit Netflix show The Crown, which dramatized the making of the film and the reaction to it.

Being the ever-intrepid film critic that I am, I tracked the royally blacklisted film down to give it a gander, and I’m wondering what the Queen is all bent out of shape about.

The film’s most shocking and most genuine scene comes at the end, where the Queen recounts to her family how difficult it was to keep a straight face when meeting the US ambassador, because he looked like “a gorilla.”

I suppose the Queen calling the US ambassador a gorilla could be seen as a big deal in 1969, but after the last 50 years of royal chicanery, it barely registers as a blip on the radar screen.

For instance, ‘Gorilla-gate’ pales in comparison to Prince Charles being exposed as a spineless –and lacking another piece of vital male anatomy– coward for his treatment of his wife Diana, his affair with Camilla Parker Bowles and his ugly divorce.

It also pales in comparison to the Prince Andrew-Fergie fiasco and the recent allegations regarding Andrew’s supposed pernicious sexual predation.

And it isn’t nearly as bad as Prince Harry’s falling for the malignant malcontent Meghan Markle, and then the ensuing embarrassment of Megxit.

While the film closes with the mild chuckle of ‘Gorilla-gate,’ what precedes that is an hour-and-a-half of the most horrifically monotonous and mundane documentation of royal minutiae imaginable.

The most striking thing about the documentary is, like the royal family itself, how painfully dull, contrived, manufactured and repetitive it is.

The film aggressively tries to paint the royals as a ‘working family’ whose family business happens to be being royalty. It incessantly refers to the Queen ‘going back to work’ or still being ‘on-duty’ even while on holiday – and she seems to be perpetually on holiday. What that duty is, exactly, is never quite clear.

Some of the most unintentionally funny scenes are of the Queen and Prince Philip pretending to do paperwork. Like bad actors, they poorly improvise scenes where they blankly look at papers and inanely talk to aides about it… and it’s hysterical. This happens so often it feels like the movie should have been titled The Banality of Busy Work.

The two of them are also perpetually looking at a bevy of newspapers. But like illiterate extras on a big-budget movie set, they don’t seem to actually read any of them; instead they just scan them looking for pictures of themselves.

To be fair, the Queen does almost come across as human a few times, but the biggest takeaway regarding her is that if dead-eyed, mindless small talk were Olympic sprinting, she would be Usain Bolt.

As for Prince Charles, the documentary opens with a scene of him, then in his early twenties, water-skiing shirtless. The sight of the pasty Charles, a black hole of anti-charisma, as the allegedly athletic man out on the water in his swim togs isn’t so much reminiscent of Sean Connery as James Bond as Mr Bean as James Bland.

In a later scene, the cartoonishly goofy-looking Charles plays cello with his youngest brother and it made me think of the in-bred hillbilly from Deliverance playing banjo.

The purpose of Royal Family was to humanize the royals and make them relatable, to show they’re just like the rest of us. That premise doesn’t fare so well when the Queen goes through her stunning jewelry collection, marveling at the glorious history of pillaging that has bequeathed her such impressive accoutrements.

They also don’t seem very relatable as they castle-hop from Buckingham Palace to Balmoral to Windsor and back again, or travel the globe on their giant yacht or personal train.

The documentary isn’t so much Lifestyles of the Rich and Famous meets The Real Housewives of Buckingham Palace as it is an episode of The Contrived Chronicles of the Cold, Clueless and Criminally Comfortable.

If you like watching spoiled, mindless mannequins smiling vacantly and waving robotically as they live lavish, unearned lives and attend endless ceremonies and pageants in 1969, then Royal Family is for you.

But if you prefer robustly absurd comedy mixed with seedy melodrama and sex scandals, then you’re better off skipping Royal Family and watching the daily news coverage of the royal family instead.