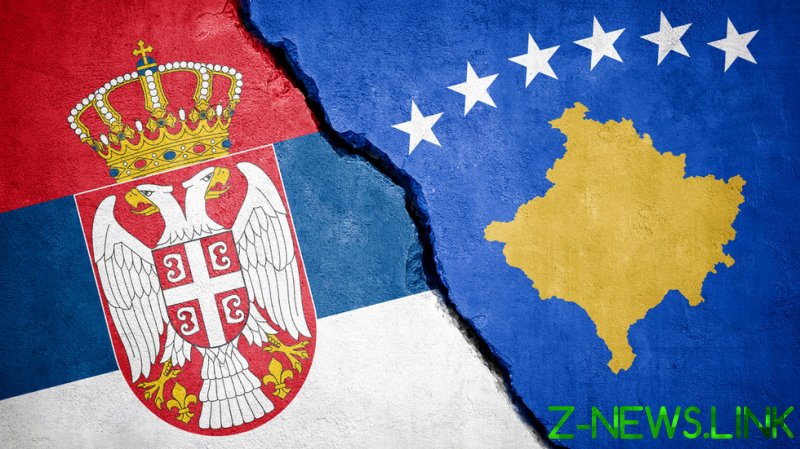 In September 2020, Pristina and Belgrade agreed to normalize economic relations, in a move hailed by the mainstream media as historic. However, the concord failed to resolve the many serious questions that have hovered over Kosovo’s future ever since it controversially declared independence from Serbia in 2008.

The primary source of contention is four northern municipalities where ethnic Kosovo Serbs comprise a majority of the population. While nominally part of the aspiring state, the quartet remains under de facto Serbian rule. Both a partition and a land swap have been discussed intensively over the years at the highest levels, although the current position of Kosovo’s prime minister, Albin Kurti, is that no territorial concessions will be made to Belgrade whatsoever.

Pristina is supported in this intransigence by a number of Western countries, including the UK, which played a pivotal role in the 1999 NATO bombing campaign that vanquished Serb forces from most of Kosovo. Newly leaked files now make clear London is attempting to finish the job, not through brute force, but by manipulation, in the guise of a community bridge-building endeavor.

Dubbed ‘Strengthening Positive Peace in Kosovo and Serbia’, and costing £5 million between 2020 and 2022, it aims to engender increased support for Kosovo’s national government among Serbs, challenge “identity-based narratives” and achieve “social change at a national level” – in other words, reduce tensions between local populations, and diminish any notion of a difference between them.

“Communities in Kosovo and Serbia will be more resilient against divisive or conflict-generating narratives, which will become less prominent in mainstream discourse, and play an active civic role to emphasise cooperation and development for all parts of their societies,” the project’s proposed “theory of change” states.

Noble ambitions in theory, although when considered in tandem with previously leaked Foreign Office files related to covert activities targeted at Russophones in the Baltic states, the interpretation that this is ultimately concerned with compelling ethnic Serbs in Kosovo to forsake their motherland, and accept they are now and forevermore will be guests in an ‘independent’ foreign country, is amply reinforced.

As in the Baltics, Whitehall specifically aimed to “engage” Kosovo’s youth in various activities and programs as “agents of change,” building their capacity to become “social entrepreneurs,” and “campaign and advocate on relevant social issues across ethnic divides.” Young citizens “unable to emigrate” were of particular interest, presumably on the basis their unemployment and lack of opportunities would make them more likely and willing to engage.

Underlining the sinister nature of the “peace” initiative, a dedicated section in one file outlines the enormous efforts that would be undertaken to obscure the UK’s involvement and maintain the false impression publicly that the effort was a strictly local affair.

All participating organizations and their employees were to sign non-disclosure agreements, and “briefed and instructed” on “how to represent project funding” if asked, although only staff at the highest levels would have any idea of London’s hidden hand. No internal or external communications were to mention Whitehall or contain its branding, and staff running social media platforms associated with the project would be careful to geotag posts in “the area of the targeted population,” rather than their actual location.

Moreover, social media advertising was to be “carefully calibrated to ensure growth is perceived as organic, rather than the result of external funding,” with “social media, traditional media, and local interlocutors” constantly monitored “to understand how target audience(s) perceive project channels [and] identify any association of the project with the UK government or other donors.” In the event anyone’s cover was blown, an evacuation plan – including “measures to remove or destroy data, including hard drives” – would be promptly activated.

Quite some ruse, but then Whitehall has every reason to obscure its true role – if the Serbs caught wind, they would quite understandably be suspicious of the endeavor’s true objectives. Still, were anyone in a position of power to raise objections about the project or indeed any other covert UK action in the Balkans, they could in short order find themselves in deep trouble.

A separate leaked file, related to a “rule of law initiative” run by the National Security Council’s Stabilisation Unit, makes very clear that London won’t tolerate high-level opposition to its agenda for the region, and will readily employ active measures to neutralize any and all resistance.

“In contexts where elite incentives are not aligned with our objectives/values… an approach that seeks to hold elite politicians to account might be needed,” the document obliquely yet ominously states.

To this end, the Unit planned to “build relationships and alliances with those who share our objectives and values for reform” by funding and “mentoring” a nexus of homegrown NGOs and civil society organizations to “bring local governments to account” and “align the programme with stated goals.”

In other words, the cultivation of an army of trojan horses to lobby, smear, campaign against, and, if necessary, bring down troublesome regional governance actors. The constellation of media organizations dotted across the Balkans funded and trained, if not outright created, in secret by the UK – some of which were recently exposed by this journalist – could also prove effective in this effort.

It may likewise be significant that a classified document related to strengthening Pristina’s judiciary somewhat amazingly reveals Whitehall plays an intimate role in training and appointing Kosovo’s judges and prosecutors, due to its dissatisfaction with previous appointments. Could this power also have implications for Balkan politicians not sufficiently conducive to London’s machinations?

The file furthermore references the 2013 Brussels Agreement, which integrated once-parallel Serb and Kosovan police, security and legal structures in the would-be republic, and mandated the composition of its national and local judicial panels be proportionate to its population. This seemingly confirms London influences their membership too, guaranteeing representatives of both extractions are fully submissive to its goal of achieving Kosovo’s total and permanent severance from Belgrade.

UK Prime Minister Boris Johnson’s grandiose plans for a post-Brexit ‘Global Britain’ have been widely panned as a fantastical, dangerous and ill-fated attempt to recover the long-lost glory days of Empire. However, these leaked files make clear the sun never truly set on it in the first place – it’s just that now, dominance of faraway lands is maintained insidiously, by clandestine infiltration of civil society at every level, unknown, unseen, and unconsented to by both the UK’s own population and the citizens of all countries in Whitehall’s neocolonial crosshairs.