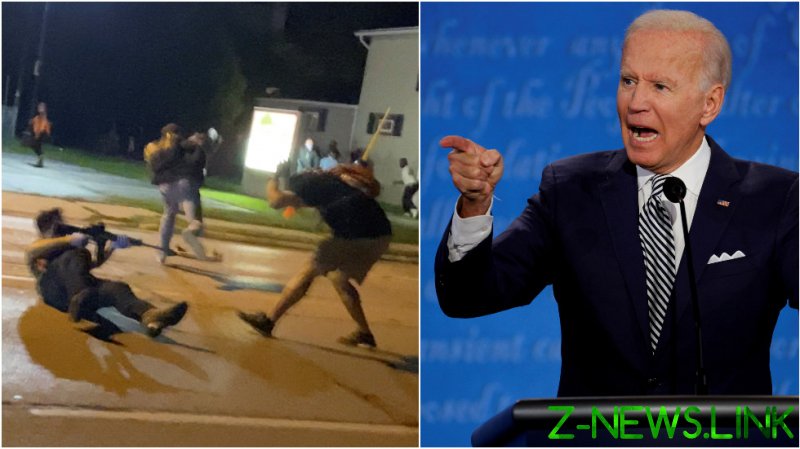 “Formal demand for public retraction is being prepared for Biden-Harris campaign on behalf of Kyle Rittenhouse,” the lawyer, Lin Wood, said Wednesday on Twitter. “I also hereby demand that Joe Biden immediately retract his false accusation that Kyle is a white supremacist and militia member responsible for violence in Kenosha.”

At issue is a campaign video that Biden, the Democratic presidential nominee, released on Wednesday accusing President Donald Trump of refusing to condemn white supremacists. The video included footage of Rittenhouse in Kenosha and other clips to depict the ‘white supremacy’ that Biden claims Trump failed to denounce.

Rittenhouse was charged with first-degree murder and attempted murder after shooting three people at a Black Lives Matter protest on August 25, two of them fatally. His supporters and defense have said he was under attack by rioters and shot in self-defense.

Leftists politicians have branded Rittenhouse a racist, while Democrat Representative Ayanna Pressley even calling him a “white supremacist domestic terrorist.” But unlike members of Congress, Biden doesn’t have protection from legal liability for his statements since he currently holds no political office.

Reporters digging into Rittenhouse’s background have found no “clear-cut evidence” of ties to anti-government militias or white nationalist groups. NPR and CBS News found he was extremely pro-police and attended a Donald Trump rally in January.

Wood was also the lawyer who obtained legal settlements from CNN and the Washington Post for defaming his client Nicholas Sandmann, the Kentucky high schooler whose January 2019 confrontation with a Native American demonstrator in Washington, DC was misrepresented by media outlets. Sandmann still has lawsuits pending against ABC, CBS, the New York Times, Rolling Stone and Gannett, which owns USA Today and the Cincinnati Enquirer, among other publications.