Home / WORLD / Lawmakers sheltering from Capitol Hill riot may have been exposed to CORONAVIRUS, physician says

Lawmakers sheltering from Capitol Hill riot may have been exposed to CORONAVIRUS, physician says 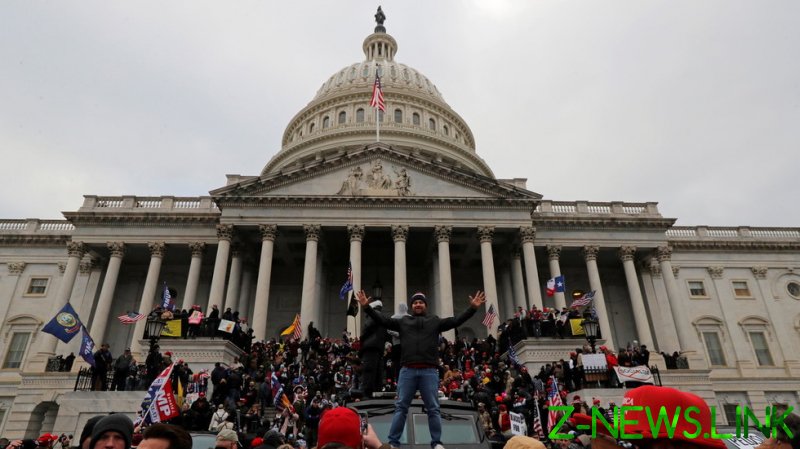 “Many members of the House community were in protective isolation in the large room – some for several hours,” the Associated Press reported Capitol physician Dr. Brian Monahan as saying on Sunday. “Individuals may have been exposed to another occupant with coronavirus infection.”

The location of the “large room” was not specified, but it is here that lawmakers were rushed to when a crowd of pro-Trump protesters forced their way into the Capitol on Wednesday, as Congress was in the process of certifying Joe Biden’s electoral victory. As the mob cheered, jeered and vandalized the building, the lawmakers hunkered down until police regained control.

Monahan did not elaborate on who may have been carrying the virus, or whether it was an elected official, security officer, or other member of staff.

Earlier, liberal commentators slated a group of Republicans in the room who refused to wear face masks.

Before the threat of Covid was in play, Democrats and Republicans alike condemned the riot, in which five people died. One of them, an unarmed female protester, was shot by a police officer. Three people suffered “medical emergencies” and passed away, while a police officer, originally thought to have been struck with a fire extinguisher by protesters, died on Thursday. According to ABC News, authorities now believe his death was “driven by a medical condition.”

Some liberal pundits compared the breach of the Capitol to the 9/11 attacks and the Japanese attack on Pearl Harbor, while Democrats drafted articles of impeachment against Trump, accusing the president of inciting an insurrection against Congress. A vote on impeachment could take place as early as Monday.