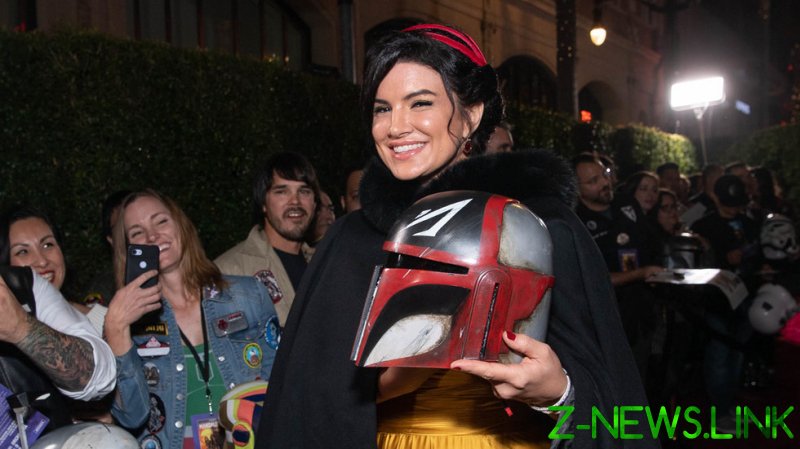 As Aleksandr Solzhenitsyn wrote in The Gulag Archipelago, his account of living in a communist labor camp, “Unlimited power in the hands of limited people always leads to cruelty.”

We have seen this cruelty first-hand through the historical documentation of communist gulags and Nazi concentration camps, and the way that unchecked power in the hands of a few led to some of the most horrific atrocities humanity has ever seen.

But what happens when you can no longer speak of the past or draw historical comparisons? For actress Gina Carano, along with millions of other Conservative Americans, history is starting to take a turn towards repeating itself, only this time it’s called ‘Cancel Culture.’

In the United States of America, we are told that we have free speech, guaranteed under the First Amendment. People are supposed to be able to speak freely and politically associate with whomever they want. However, with the growing movement of cancel culture, and the increased amounts of political targeting of Conservatives, it is clear that the founding principles of our nation are eroding, and we are regressing towards patterns similar to those seen in the run up to the Holocaust.

It has often been viewed as taboo, controversial, or hyperbolic to compare modern struggles or political events in the 21st Century to Nazi Germany. But as cancel culture and political persecution increase and become commonplace in America, the comparisons are becoming more relevant. A warning of what’s to come if cancel culture isn’t rejected and halted.

Gina Carano was fired by Disney from her role in the Star Wars spin-off The Mandalorian, for simply pointing out the uncomfortable truth that many see but refuse to discuss: the current political hatred against Conservatives in America has similarities to the hatred that caused the Holocaust.

In 2021 in America, you can now be fired for knowing history and not wanting to see it repeated. Gina Carano wasn’t fired for being controversial, she was fired for being right. But it’s much easier for the Left to spin her social media posts as morally reprehensible when the alternative is to admit that they are becoming Hitlerian in their own efforts to silence others. There have been countless examples of celebrities and politicians using Holocaust relativism to describe the current political landscape. From Democrats continuously comparing Donald Trump to Hitler, to actors like Arnold Schwarzenegger comparing the recent protests at the US Capitol to Kristallnacht, the Night of Broken Glass, when synagogues and Jewish-owned businesses across Nazi Germany were vandalized and burned in 1938.

If Disney had a zero tolerance policy for Holocaust relativism, then Pedro Pascal, the star of The Mandalorian should have also been canceled after he posted a meme that compared the detention of illegal aliens in America to Jews being placed in Nazi-run concentration camps. A meme which, incidentally, was wholly inaccurate.

Disney’s embrace of Pascal’s exaggerated comparison of illegal aliens being detained for breaking US immigration law to Jews being sent to camps where they were gassed and cremated further reveals that, just like Hitler and his propaganda ministry operated by Joseph Goebbels, Disney is not concerned with facts or historical truths. They are willing to say and do anything, regardless of merit or truth, for the sake of expanding and preserving their Leftist political narrative. Luckily, they have Big Tech, the media, and a full-blown Democrat-dominated government to help them succeed.

As Adolf Hitler once said, “Propaganda tries to force a doctrine on the whole people; the [party] organization embraces within its scope only those who do not threaten on psychological grounds to become a brake on the further dissemination of ideas.”

Ironically, during the Second World War, Walt Disney, the founder of Disney utilized his animation studios to create propaganda cartoons for the United States government that featured prominent Disney characters fighting the Nazis. But you would only know that if you studied history, which seems to be a punishable offense by current standards at Disney.

Gina Carano is a free-thinking, educated, conservative woman who also happens to be a student of history. Thus, in the words of Hitler, she is resisting the Leftist propaganda and threatens the dissemination of their ideas. Just like the Jews didn’t fit into Hitler’s idea of the type of people he and his National Socialist Party wanted to embrace, Gina Carano doesn’t fit into the Leftist echo chamber that Hollywood and Disney have become over the last 80 years since the Second World War. Carano’s social media posts revealed her as a threat to the Leftist propaganda machine. In Nazi Germany, she would have been executed or sent to a camp for being in violation of Nazi Party doctrines. In Nazi Germany, people were often given death sentences for trying to evade the Nazi imposed censorship, which included book burning and banning foreign radio stations to completely control what Germans knew about the war.

In today’s modern Digital Holocaust, there are no death camps…yet, but there is cancel culture. If cancel culture has made one thing clear, it’s that we are living in an information war. The progressive left, the media, and big tech have proven that digital extermination is harsh enough punishment to silence any opposition or dissent, and to scare others into compliance. History has shown us that these were and still are the favored tactics of communists and Nazis, two sides of the same Leftist coin, responsible for the death of over 100 million people (and counting) worldwide.

The Holocaust didn’t begin with sending Jews to death camps, ovens, and gas chambers. It began with cancel culture.

Together, censorship and propaganda were used to prevent any and all political dissent, and while the Internet and social media didn’t exist in 1930s Germany, book burnings filled the place for what by today’s standards would be de-platforming.

Just as cancel culture was used in Nazi Germany to create a singular, acceptable opinion and way of life, cancel culture is being used today by the political left the same exact way to create a hostile and politically violent environment against those the Left deem “undesirable” or “deplorable.”

Conservatives are the new Jews was the point I was making when I wore a yellow Jewish star and handcuffed myself to Twitter’s headquarter office in New York City in 2018 to warn of the escalating censorship and silencing of Conservative voices. That was over two years ago. Two years later, its still true, with the firing of Gina Carano by Disney being further evidence that we are witnessing and living through a digital Holocaust that could very well turn into a physical Holocaust someday. The post-Holocaust war cry of “Never Again” can only continue to hold weight and significance if we allow ourselves to learn from history instead of punishing those who revisit history as a teaching experience.

As Hitler said, “Only the continuous and steady application of the methods for suppressing a doctrine makes it possible for a plan to succeed.”

Sadly, Disney has not taken any lessons from history or its founder. Instead, the company whose founder was an outspoken critic of communism who once made animated films like “Education for Death,” about brainwashing a young German boy into a lethal Nazi soldier, is now embracing the very brainwashing and cancel culture tactics that Nazis and communists have utilized for the sake of human suffering, unchecked power, and unfathomable cruelty.