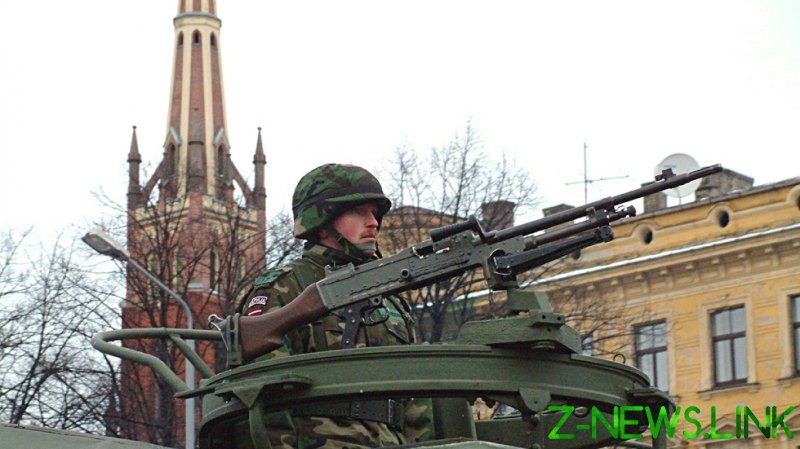 Multiple videos of the incident surfaced online on Saturday, promptly going viral. Footage from the scene shows multiple soldiers in the middle of a street, crouching behind cars and firing their weapons at a building.

One of the solders discharged his assault rifle as a woman with her baby was passing by, another video shows. The woman was left visibly shaken, while the baby began crying.

There were no visible cordons or markings that the area was being used for drills, with pedestrians walking right next to the heavily armed troops. The exercise looked very lifelike, with only an unarmed supervising officer casually moving among the troops serving to indicate that the street had not turned into an actual warzone.

The incident has drawn an overwhelmingly negative reaction, with the comment sections of the videos full of angry remarks. Some said that residents of the city should have at least been given clear notice via SMS, while others argued that the area should have been completely cordoned off.

Following the outcry, the military gave a lackluster apology, stating that it uses only blank cartridges for such events, and insisting that no harm was caused.

“During such drills, we only use blank cartridges, which make noise but do not pose any danger to the health and life of others. In this case, blank cartridges were also used, and this situation was a bitter misunderstanding, for which we apologize. The Defense Ministry calls on the public to show understanding for the exercises,” the ministry said in a statement cited by the TVnet website.

The Riga ‘firefight’ came as a part of the NATO Namejs 2021 war games, which are running from August 30 to October 3 across multiple locations in Latvia. The exercises involve some 9,300 soldiers from different countries of the bloc. Three soldiers were injured during the drills in a separate unspecified accident on Saturday, with the Defense Ministry stating that two servicemen from the “allied armed forces” had ended up hospitalized in “stable” condition.