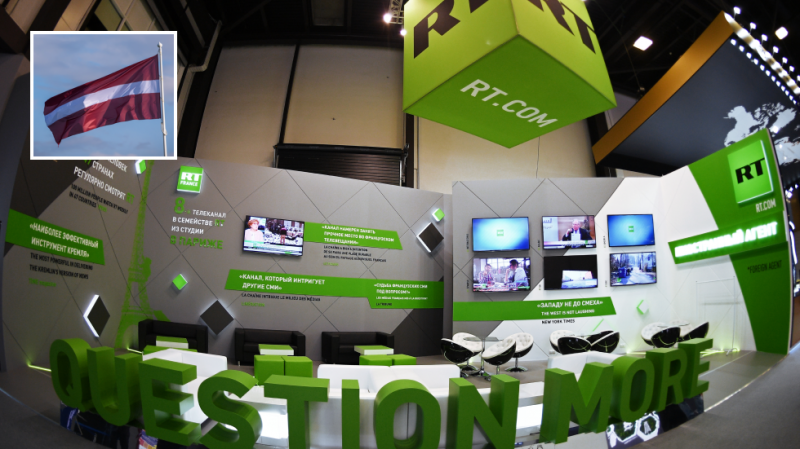 RT confirmed on Wednesday morning that authorities had started to implement restrictions on access to its Russian website, in line with a decision by the Latvian National Electronic Media Council. The ruling, issued in June last year, has already seen seven separate RT channels officially banned from the airwaves in the Baltic country. Free press watchdog Reporters Without Borders railed against the decision at the time, saying it was made on a “flimsy legal basis.”

“Latvia has begun to shut down access to the RT website in Russian. The site is now inaccessible to users of several major providers in the country,” the network said in a statement.

Officials in Riga have claimed that the Russian state-funded outlet is “effectively controlled” by Dmitry Kiselyov, a Moscow-born journalist who is on a list of individuals officially sanctioned by the EU. However, nobody in Riga has ever produced any evidence to demonstrate Kiselyov has ever held any role at RT, its parent company or any of its projects, channels or platforms. In a statement issued at the time, Kiselyov mocked the decision, saying that he had no involvement with the news group and arguing that the move should be reversed.

In a statement issued on Wednesday, Anna Belkina, Deputy Editor in Chief of RT, contended that the decision “flows from a series of troublingly absurd assertions made by Latvian intelligence, in which they falsely link a sanctioned individual to RT.”

The claims, she said, have become “a rabbit hole which has led its government to blindly take this illegitimate action. Not only has Latvia already been castigated by Reporters Without Borders for misusing EU policy, and threatened its own people with draconian fines for watching the media they want to consume, but now it is sending a message to the world that its free market and free press is officially dead.”

“Sadly,” Belkina added, “this is just the latest step in what’s become a quotidian campaign against RT and other alternative voices around the world.” However, she said, “rarely are such actions so thinly veiled as those in Latvia.”

A number of visitors to RT’s online content on Wednesday were redirected to a message warning them that their “internet browser is trying to connect to a website which, in the territory of the Latvian Republic, is unlawfully distributing television programs without a re-transmission permit.” 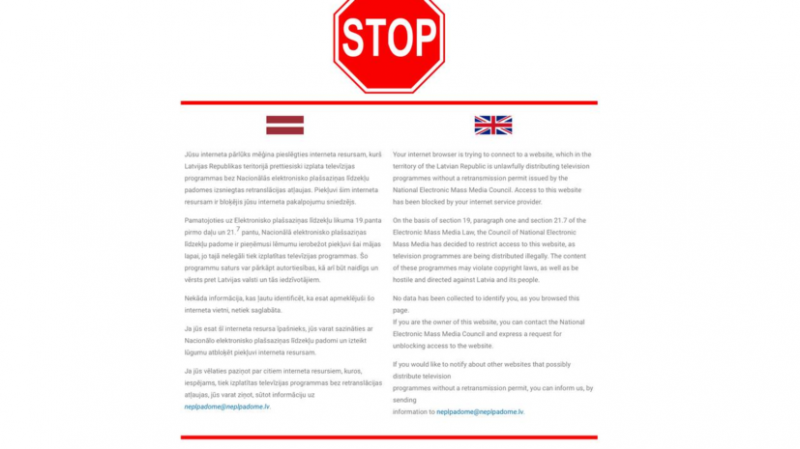 Valentin Rozhnetsov, Editor in Chief of the Russian state-funded Sputnik Latvia news service said that the country “is trying with all its might to play the role of a state governed by the rule of law… this time though, something seems to have broken down.” He added that the move was based on “thin compliance with the law” and claimed that, instead of being based on agreed policy, it was being made on a technicality, driven by “political” motives.

In February, local media announced that the Seimas, Latvia’s parliament, had adopted a bill in its final reading that will criminalize people for watching unauthorized broadcasts picked up from across the country’s eastern border. Ivars Abolins, chairman of Latvia’s National Council for Electronic Media, issued a statement backing the ban. “We have protected, are protecting, and will protect our information space,” he said. The regulators claim that talk-show guests on the Russian-speaking channels have incited hatred and called for war in Europe.

At the time, the Russian Embassy in Riga issued a stern protest in response. In a statement, diplomats claimed that the policy was “in the best traditions of dictatorship.”

More than one in three Latvians reports speaking Russian in the home as a native language, but dozens of broadcasters showing programming aimed at the minority group have seen their licenses revoked and have been pulled off the air. In 2018, the country’s main opposition party, Harmony, which is led by Russian speakers and has close links to parties across the border, won nearly a quarter of the available seats in the Seimas in a parliamentary election.