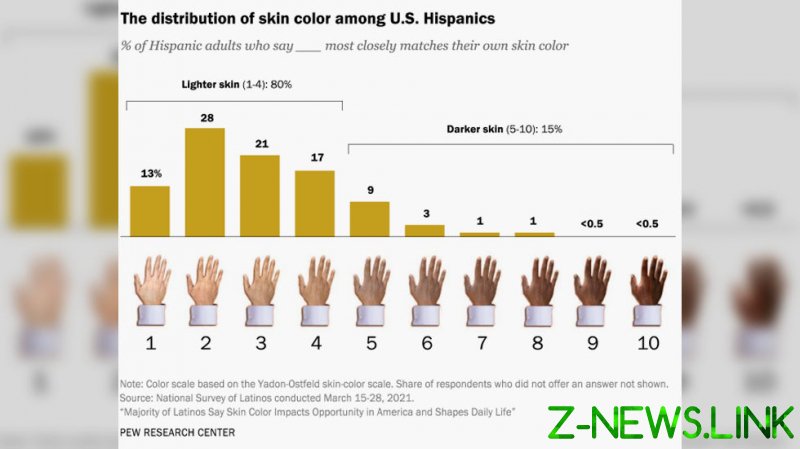 Over 50% of Latino adults in the US who participated in the poll said they experienced some form of discrimination based on their skin color during the first 12 months of the coronavirus pandemic, though many claim skin color is directly related to the potential for racist encounters.

The head-scratching part of the survey came when pollsters categorized respondents on a “10 step scale” based on how they describe their own skin color. Among all respondents, 56% said their skin color “shapes their daily life experiences,” while 62% who said they had “darker skin” claimed their color affects their lives. Those who said they have “lighter skin” were a bit lower on daily discrimination, with 57% saying their race affects their day-to-day activities.

Pew’s study relied on respondents to identify their own skin shade, with those choosing a level between one and four placed in the “lighter skin” category and those who chose five to 10 on the scale placed on the “darker” side. Respondents selected from a list of animated hands with various shades on them, meant to represent the different skin tones for Hispanic Americans.

Examples of discrimination included in the survey vary from being “unfairly stopped by police” to being called “offensive names” by both Latino and non-Latino adults. A majority said lighter skin color can help one get ahead in the US.

Latinos, lead author Ana Gonzalez-Barrera said, are “very aware of colorism in their community and how having darker skin color can hurt their chances to get ahead in life and, in the opposite way, how having lighter skin can help them get ahead.”

While Pew’s poll has received support from some people since its release, it has left others questioning the use of a skin-color scale and by extension, the results.

“The left is making the ‘Family Guy’ skin color chart real life,” one Twitter user wrote, referring to a scene in the animated comedy where a character is literally judged based on the tone of his skin using an indicator card, eerily similar to Pew’s.

According to Pew’s findings, politics also plays a role in how Latinos view discrimination. Latino adults who identify as Democrats are more likely than Republicans to say their “skin color” shapes their daily lives, according to the survey. Over 60% of Latino Democrats said their skin color affects their daily lives “a lot” or “some,” while only 40% of Republican respondents said the same.