Last time it was 180 years ago 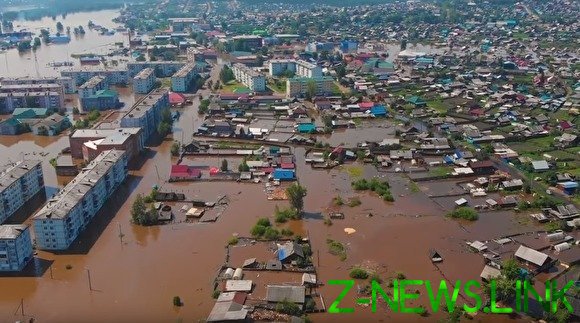 In the Irkutsk region July 1, began work of the Commission for the assessment of damages from severe floods caused by heavy rainfall. The flood is retreating, but meteorologists predict a return to rainy weather, causing the water level in reservoirs can rise again.

According to EMERCOM of Russia in the Irkutsk region, from 25 June, flooding affected 83 towns under water took 6.7 thousand houses and 6.8 thousand household plots. “They live 32777 people. In the area of flooding was a 43 socially significant object: health posts, schools and kindergartens, according to the Department. — As of July 1 in 55 settlements remain flooded 3296 homes, home 9809 people, 18 socially important facilities, 3525 household plots”.

Of the flooded areas evacuated 2273 people. Those who remain in apartments and houses, the products brought by boat. The flood injured 744 people, and they got hypothermia and injuries of varying severity. 153 residents required hospitalization, 591 victim had medical care on an outpatient basis. According to media reports, the floods killed five people.

See also:  How to change the canons of female beauty in the last hundred years. Photo

Now residents of the Irkutsk region receives humanitarian aid. Earlier in the inundation area revealed the inflated food prices. So, in the town of Tulun, the cost of a loaf of bread soared to $ 100 — in this situation, now we understand the local authorities.

One-time financial assistance in the amount of 10 thousand rubles will receive about 24 thousand citizens whose homes were affected, said the Irkutsk government. In addition, Prime Minister Dmitry Medvedev ordered to pay the families an allowance of 1 million rubles. The injured will receive from 200 to 400 thousand rubles.

Meanwhile, in the region arrived more than 1.3 million soldiers who will help the people to clear the area, to monitor the biological environment, to provide medical care and evacuate the injured. In the disaster area sent hundreds of pieces of military and special equipment, planes and helicopters. According to the MOE, the flood destroyed the road bridges 13. At the moment, due to flooding, remains closed, the Federal highway “Siberia”.

See also:  The head of the NAB has announced a new suspicions in the matter of "the Wall"

According to preliminary estimates, preliminary damage from floods to agriculture amounted to 300 million rubles. The most affected crops (flooded 3655 hectares, 25 hectares of potatoes, the water hit stored in the warehouses 767 tons of grain), killing dozens of horses and pigs, the fate of hundreds of heads of cattle is unknown.

In several districts of the Irkutsk region continues to operate emergency mode. Hardest hit areas Nizhneudinsk, Taishet, Tulun, of Chunsky, Zima and Kuitun districts, where out of the banks of the river. According to the Roshydromet, in the coming days in the region again rain is expected, in connection with this flood can go on a “second run”. According to forecasters, the last time such flooding in the Angara region was 180 years ago.