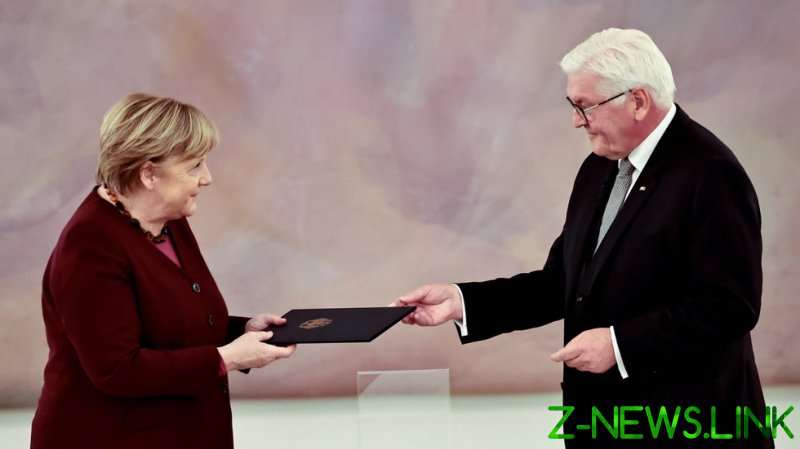 On Tuesday, Merkel officially left the role she has held for nearly 16 years. Already the second-longest serving Chancellor in German history, she will still effectively remain at the helm until a new government is formed. And the coalition talks could well continue into December, according to a number of German media outlets.

During the official ceremony at Bellevue Palace in Berlin, Steinmeier did not stint on praise, describing Merkel’s time in power as “one of the greatest periods in modern German history.” The president went on to claim that it is thanks to Merkel that Europe did not “break up.”

Merkel’s time in power was “defining for the image of Germany in the world and for a whole generation of young Germans,” Steinmeier continued. He acknowledged, though, that Merkel’s tenure was marked by numerous crises and challenges.

Not everyone in the country thinks the outgoing chancellor has risen to those challenges. Merkel’s decision to let in over a million migrants and refugees in 2015 drew harsh criticism, even from within her own CDU party. The open-door policies saw some disenchanted conservatives join the further-to-the-right Alternative for Germany party (AfD), which enjoyed a steep rise in popularity, while Merkel’s CDU/CSU bloc has been steadily losing ground since.

Tough lockdowns and other pandemic-related policies enacted by Merkel’s administration since April 2020 have not proven very popular with some sections of the public, either.

All that combined saw Merkel’s CDU/CSU take a historic beating in the September 26 general elections. The rival Social-Democrats came out on top, and seem on track to secure a new coalition.

Armin Laschet, the man Merkel had picked as her successor, conceded defeat and admitted the CDU “needed renewal in all areas,” adding that he was prepared to step down as the party chair.