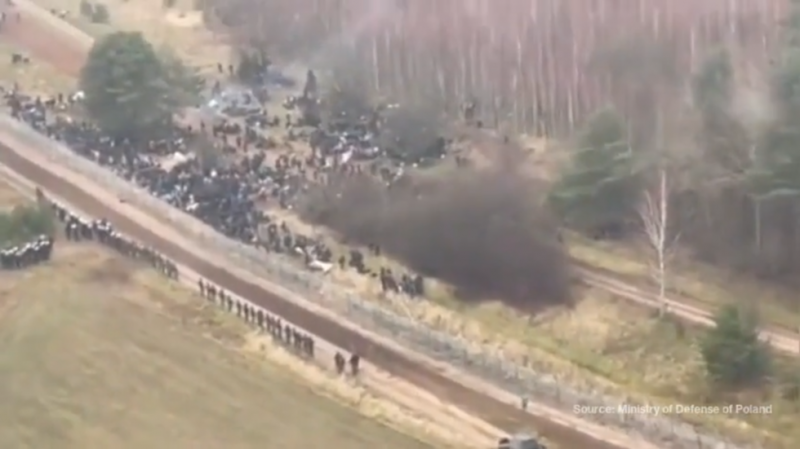 The movement was initially reported by the Belarusian Border Guards and was later confirmed by videos posted online showing men, women and children moving along a highway.

Upon arriving at the Belarusian side of the frontier, at the Bruzgi-Kuznica crossing, they were let through and allowed to pass to the Polish border fence, Sputnik Belarus news agency reported.

At the same time, Poland’s Ministry of Defense published a video showing a large group of migrants in a forest, suggesting they had not yet reached the frontier.

The refugee crisis on the border between Poland and Belarus began in the summer. It ramped up in June when Belarusian President Alexander Lukashenko warned his country would no longer make any effort to stop illegal immigration into the EU. Brussels has accused Minsk of flying thousands of people in and shuttling them to the border as a form of warfare. Most of the asylum seekers are from the Middle East. In October, Warsaw reported that more than 23,000 migrants have tried to cross the Polish-Belarusian border.

Poland has also accused Lukashenko of provoking an escalation, suggesting that Minsk would like to see deaths on the border.

Poland has also come under criticism for its handling of the migrant crisis.

Despite its EU obligations to accept asylum applications, Poland refuses to allow people to cross the border, leaving many stuck in no-man’s-land with a serious lack of food, shelter and other provisions. In September, Warsaw’s treatment of the migrants was criticized by London-based human rights NGO Amnesty International, which accused Warsaw of the “unlawful forced return” of Afghan citizens who were taken back across the border after successfully crossing into Poland.