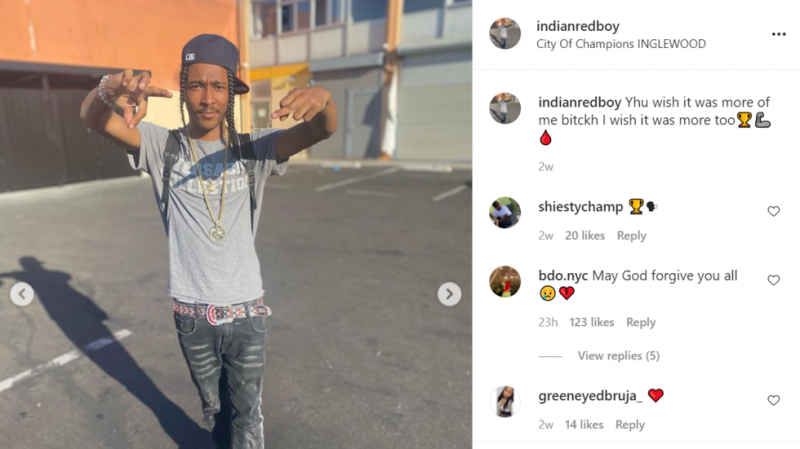 According to reports, 21-year-old Zerail Dijon Rivera, who goes by the name ‘Indian Red Boy’, was sitting in his car with a friend in Hawthorne, a city in Los Angeles County, California, when gunshots began to ring out.

Rivera, who was livestreaming at the time, was struck in the face, according to local media reports. In the video, the young rapper reportedly mumbles “get help” before slumping over.

Those who saw the horrific footage provided harrowing descriptions of the clip.

“That Indian Red Boy video is brutal. One minute you laughing it up, next minute you gasping for breath begging for help,” one Twitter user said.

Others said the footage was “foul” and expressed regret that they had watched it.

Police confirmed they had found a 21-year-old man slumped in the front seat of a vehicle, but did not identify the victim by name. The car’s windshield had several bullet holes in it, local media reported.

Paramedics responding to the incident declared Rivera dead at the scene.

A police official said it appears the rapper was targeted in a “walk-up shooting,” and added that the victim “appears to be a gang member.”

Unconfirmed reports claimed Rivera was a member of the Bloods, an infamous Los Angeles street gang.

Sadly, livestreamed deaths, including murders, are not uncommon. The 28-year-old convicted terrorist who carried out the 2019 Christchurch, New Zealand shootings broadcast the horrendous attack on Facebook.

More recently, in May, a grandmother in Memphis, Tennessee was shot and killed during a Facebook Live broadcast.