Home / WORLD / LA police was unprepared for George Floyd protest violence ‘not seen in years,’ believed it would be ‘peaceful’, report says

LA police was unprepared for George Floyd protest violence ‘not seen in years,’ believed it would be ‘peaceful’, report says 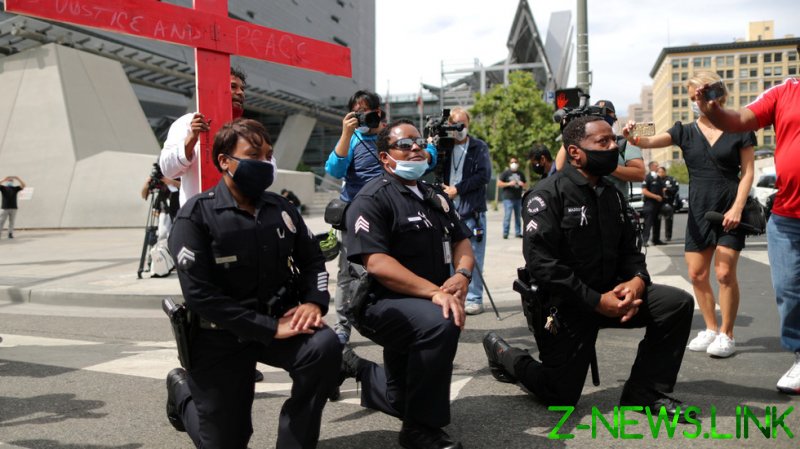 A report commissioned by the Los Angeles, California city council faults the police for arresting too many people, and not enough violent rioters; using too much nonlethal ammunition, but not stopping the riots fast enough; jailing too many protesters, but not setting up field jails; and assuming “racial justice” protests would be peaceful based on prior experience, and therefore not being “proactive” about the unprecedented and unexpected violence that followed the death of George Floyd.

Those are just some of the things that leap out of the report authored by a panel of former police commanders led by attorney Gerald Chaleff, and published Thursday.

Floyd died in Minneapolis, Minnesota on May 25, 2020. Riots broke out in the Twin Cities the very next day. Protests in downtown Los Angeles on May 27-28 were “marred by an escalating level of violence and criminality,” the report says, but LAPD treated them as isolated incidents rather than “as a manifestation of a larger expression of outrage that was spreading across” the US.

The violence caught the LAPD off guard, as they “had believed that the good relationships which had been developed with various communities would cause any protests to be peaceful, as they had been in the past.”

Hiding among the protesters were “disrupters” who threw dangerous objects at police and targeted them with lasers, the report noted, in a level of violence that “had not been seen at demonstrations in years.” Yet it faults the LAPD leadership for not being “proactive” about containing the groups whose objective was to “create chaos and confrontation with the police,” among other things.

The Chaleff report reveals that some groups of looters “appeared to be well coordinated,” using scouts and “convoys of up to ten cars” to target a location, only to move elsewhere when police responded.

Other groups that directly targeted police for violence were “dramatically” different from such rioters in the past, more violent and better organized. They threw “bricks and concrete blocks, using firecrackers or explosive devices, and pointing lasers at officers’ eyes.”

Another part of the report talks about the “unrelenting” use of lasers in both LA and places “such as Portland,” as well as “containers filled with urine, frozen water bottles, and caustic chemicals such as bleach.” LAPD reported that 106 officers were injured during the riots.

“The Department must do everything it can to provide for officer safety and at the same time protect the safety of those who are peacefully protesting,” the report said, without specifying as to how.

LAPD did not establish a command post until May 30 and the first field jail until June 2. More than 4,000 people were arrested between May 29 and June 2 – many of whom have sued the city claiming that under municipal code, they should have only been issued a citation and released. There was also “chaos of command” as officers often received conflicting orders from their superiors.

Chaleff and his team found that LAPD had lost nearly half of its senior command staff between 2018 and 2020, leaving it without leadership skilled in “public order policing,” as riot control is now called. The rank and file were also not properly trained in riot control techniques, including the “problematic” deployment of 40mm riot guns, as the dynamics of their use “dramatically change in a crowd control situation when the person engaging in the criminal behavior is not standing still.”

The report made 67 recommendations to the city council,  but the chief among them was to create a high-level position of a “Strategic Emergency Manager” within the LAPD. This displeased Black Lives Matter activists, however, who called it undue criminalization of peaceful protests.

What the report “doesn’t do is really critique the notion that LAPD should be putting down righteous protests in the first place,” Melina Abdullah, co-founder of BLM-LA, told the Los Angeles Times.