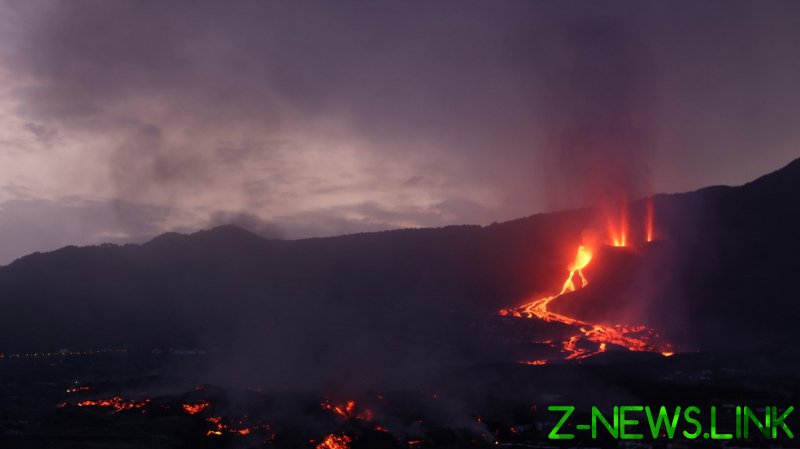 The government’s disaster zone declaration on Tuesday means that millions in state resources can be freed to support emergency measures on La Palma, and those impacted by the eruption.

Spokesperson Isabel Rodriguez told reporters the government had allocated a preliminary package of €10.5 million ($12.30 million). The fund includes €5 million to buy houses, while the rest would be allocated to purchase furniture and essential household goods after thousands had to be relocated.

Lava continues to flow from the Cumbre Vieja volcano on which fissures first opened on September 19 after decades of inactivity, destroying almost 600 houses as well as churches and banana plantations on the Canary Island popular with tourists.

Experts are concerned that the lava from the volcano could create clouds of toxic hydrochloric acid vapor if it reaches the sea. While one of the two lava rivers has slowed, the other has picked up pace. Reports on Tuesday suggested one is just 800 meters from the sea.

Authorities have been expecting the lava to reach the sea for days, but volcanic activity has been erratic, somewhat slowing the progress of the red-hot rivers. However, activity picked up again overnight, heightening concerns.

While thousands have been relocated, many remain hunkered down in coastal villages in anticipation of the molten flow reaching the Atlantic Ocean. Three villages were locked down on Monday in expectation, with residents told to keep windows closed and stay indoors.

“We are still waiting on whatever the volcano wants to do,” Miguel Angel Morcuende, director of the Pevolca response committee, told Reuters. “When the lava reaches the sea, the lockdown must be strictly observed.”

To date, no fatalities or serious injuries have been reported since the eruptions began.