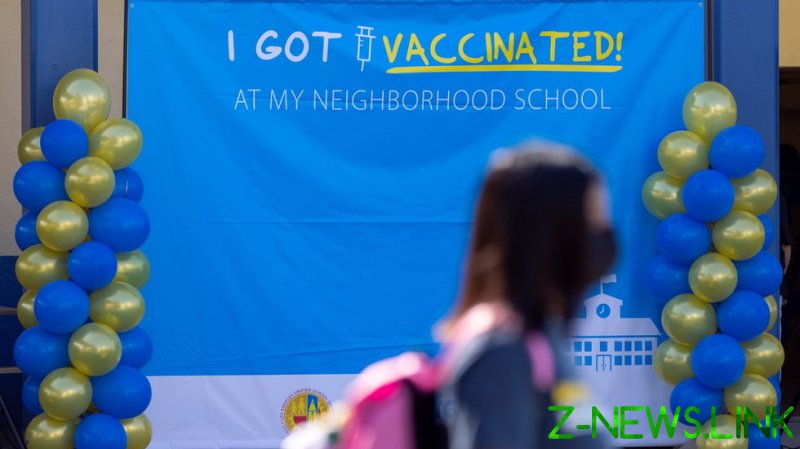 The board for the Los Angeles Unified School District voted to mandate jabs for students on Thursday, with no members dissenting. The move will require all eligible students “to become vaccinated and provide proof of vaccination” to school administrators, while kids who just turned 12 will be made to receive their first shot within one month of their birthdays.

“The science is clear – vaccinations are an essential part of protection against Covid-19,” the board wrote in a statement.

Students who qualify will be required to receive their final vaccine dose by December 19 and must be considered fully vaccinated by January 10, as the inoculations take some time to trigger the intended immune response. Those seeking to participate in extracurricular programs, meanwhile, must take their second shot by October 31, the board said.

Proof of vaccination would be accomplished through a program dubbed ‘Daily Pass’, which will track students’ vaccination and testing status, and allow them to access campuses.

LA Unified enrolls some 600,000 students, making it the second-largest school district in the US, beat out only by New York City’s. While LA is not the first to require vaccines for students – with California’s much smaller Culver City doing so last month – the new mandate in such a major district could inspire similar moves across the US, following vaccine requirements imposed at other public and private agencies. According to a local NBC affiliate, at least a dozen other districts in the state are considering their own mandates.

Earlier on Thursday, President Joe Biden expanded federal vaccination requirements, tasking federal agencies to enforce mandates throughout the private workforce, a move that triggered vocal objections from the administration’s conservative critics. The LA school board’s vote is likely to provoke a similar reaction, with around 100 protesters reportedly gathering at the district’s headquarters to denounce the decision. Some were filmed shouting at vehicles leaving the building.

Several parents also voiced concerns over the new mandate, arguing that they, and not school bureaucrats, should be in charge of their children’s health.

“As parents we have a lot of concerns about this vaccine,” said Diana Guillen, who helps lead a district parent advisory group and addressed the board in Spanish, according to the LA Times. She added: “This vaccine is experimental… This decision should be made by parents, not by you.”

Another concerned parent reportedly asked the board if it was possible to sue the district if their child “has secondary side effects that are negative” from the vaccine, though it is unclear if they ever received an answer.

To date, some adverse reactions have been reported from the three vaccines currently used in the US, though serious cases remain exceptionally rare, especially for youths. While none of the three vaccines have been approved for use in kids under the age of 12, children and adolescents have fared much better against the virus compared to older age groups, with far fewer deaths and hospitalizations seen among the young, according to the Centers for Disease Control and Prevention (CDC). State data compiled by the American Academy of Pediatrics, moreover, showed that a miniscule 0.00% to 0.03% of all childhood Covid cases have been fatal.