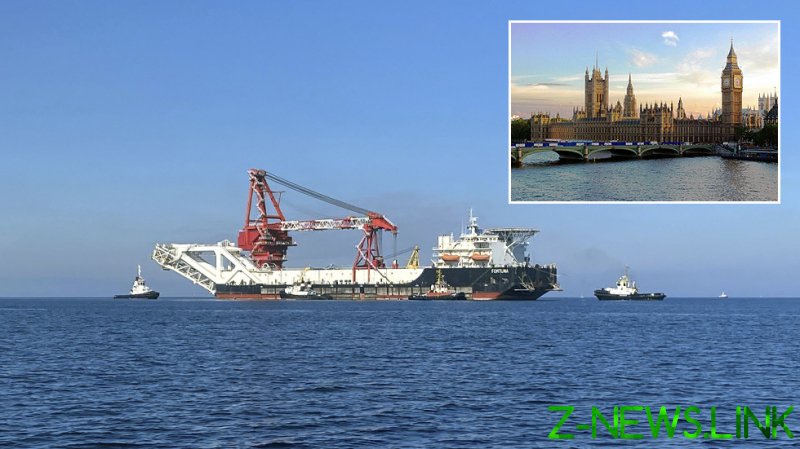 Tom Tugendhat, a Tory MP and chair of the foreign affairs committee in Westminster, also said the existing “Yamato” (sic) energy pipeline “must be frozen” in response to the arrest of Roman Protasevich in Minsk over the weekend. The most likely autocorrected name was a reference to the Yamal-Europe pipeline, which supplies Germany and Austria with natural gas from Russia, via Belarus and Poland.

Tugendhat was agreeing to and amplifying a suggestion by Polish MEP and former foreign minister Radek Sikorski – now a Harvard fellow – that stopping Nord Stream 2 “would be [the] simplest and best” move to sanction Russia, which he blamed for the incident.

Nord Stream 2 is a pipeline, under construction, running through the Baltic Sea from Russia to Germany, bypassing Poland and Ukraine. It is nearly complete, despite a years-long campaign of sanctions, obstruction and intimidation led by the US. Yamal-Europe passes through Belarus and Poland. It began operations in 1997, and reached its rated annual capacity in 2005.

Tugendhat argued that the pipeline is “where the money comes from that supports this tyrannous regime,” according to British media.

UK Foreign Secretary Dominic Raab, Tugendhat’s fellow Tory, responded that the government of Prime Minister Boris Johnson will “consider and consult” with partners on the question of Nord Stream 2.

Protasevich was arrested on Sunday after a Ryanair flight from Greece to Lithuania made an emergency landing in Minsk due to a reported bomb threat. He is the former editor-in-chief of the Warsaw-based Telegram channel Nexta and now works for Belamova, an outlet founded by Igor Losik, a consultant for US state-run media RFE/RL. Both outlets are on the list of extremist organizations in Minsk, for siding with demonstrators who called last year’s presidential election stolen and advocate regime-change in Belarus.

Ryanair CEO Michael O’Leary called the incident a “state-sponsored hijacking” and “piracy,” but the low-cost airline is still using the airspace of Belarus. A number of airlines have already announced they would stop doing so, including SAS, Poland’s LOT, Hungary’s Wizzair, Germany’s Lufthansa, and the Latvian-based airBaltic. The UK has instructed airlines based there to stop flying over Belarus, as well as suspended the air permit for the Belarus national carrier Belavia.

The European Union, meanwhile, announced that its €3 billion investment package for Minsk will remain frozen until Belarus becomes a democracy, Reuters reported.

“We will put pressure on the regime until it finally respects the freedom of media, the freedom of press and the freedom of opinion,” said European Commission President Ursula von der Leyen ahead of a meeting of EU leaders in Brussels.