Home / WORLD / ‘Kurz must go’: Austrians lash out at govt as thousands of anti-lockdown demonstrators march through Vienna (VIDEO) 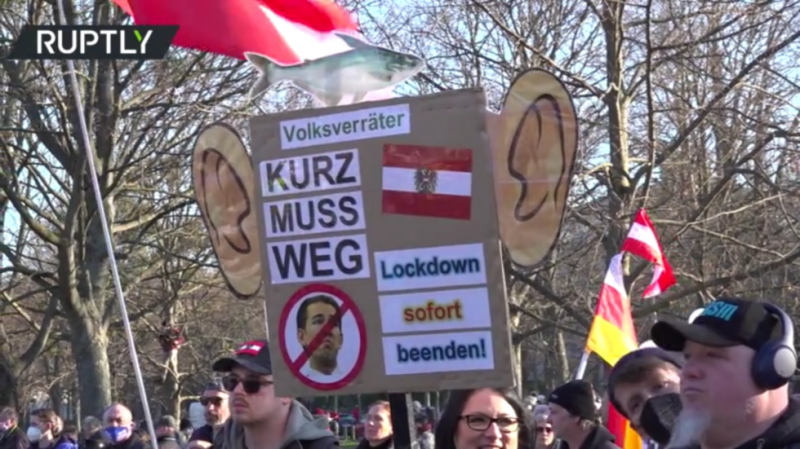 Austria’s Krone newspaper reported that around 15,000 people attended the Saturday rally. Demonstrators held placards reading “Kurz must go” as they chanted slogans calling for the resignation of Chancellor Sebastian Kurz.

Footage from RT’s video agency Ruptly shows protesters pouring into the streets of central Vienna as they waved Austrian flags. Some of the demonstrators assembled in a park where they heard speeches from leaders of Austria’s right-wing Freedom Party, which had called for the rally.

Speaking to the crowd, former interior minister Herbert Kickl accused the government of “dancing on the edge of lunacy,” and described the Covid-19 restrictions as “so weird and mad, [that] no Hollywood director could make it up.”

According to Krone, one of the leaders of the rally was detained. Several others were arrested after reportedly refusing to disperse at the end of the demonstration for breaching public order laws and Covid regulations. Footage shows officers in riot gear surrounding a man who was pinned to the ground without a mask.

There were also reports of isolated fights between demonstrators and left-wing counter-protesters.

The government has signaled that restaurants and cafes could reopen at the end of March if Covid-19 infections decline. In recent weeks, Austria has seen a string of protests against the restrictions. Last month, an estimated 10,000 people turned out for a similar demonstration in Vienna.

Austria has recorded 472,871 cases and 8,64 coronavirus-related deaths since the start of the pandemic. The country has seen an uptick in new cases in recent weeks, and health officials have warned that the British variant of the virus, which is believed to be more contagious, has become widespread.