Home / WORLD / Kremlin says it considers Lukashenko to be legitimate president of Belarus, as Putin agrees a $1.5 billion loan for Minsk

Kremlin says it considers Lukashenko to be legitimate president of Belarus, as Putin agrees a $1.5 billion loan for Minsk 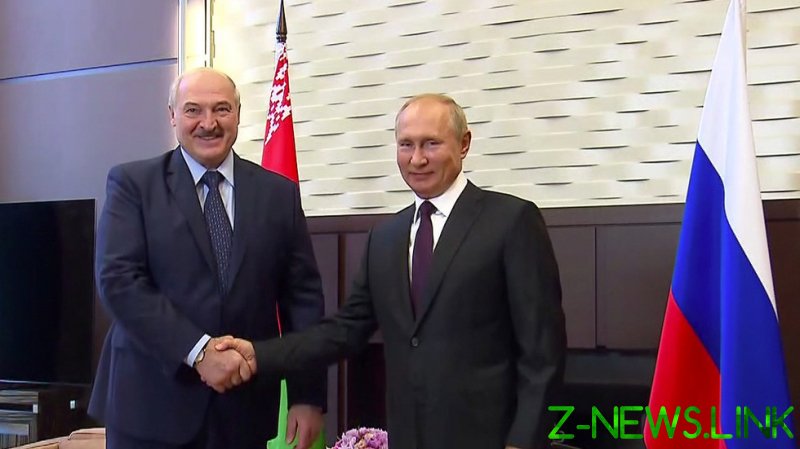 Dmitry Peskov’s comments came after threats from Western-backed opposition figurehead Svetlana Tikhanovskaya that any agreements made between Moscow and Minsk would not be recognized by her movement, should it ever come to power. Describing Lukashenko as an “illegitimate” president, she said that, in her opinion, any deals he makes have no legal force.

“Mr. Lukashenko is the legitimate president of Belarus and is the counterpart of President Putin in interstate relations,” Peskov emphasized. “As for those who do not agree with the election results, they are all citizens of brotherly Belarus and we appreciate and love them. But we want everything that happens in Belarus to take place not in the form of unconstitutional  maneuvers, but legally.”

During the Sochi summit, Putin agreed to Lukashenko’s request for a new loan worth $1.5 billion. Peskov said this should not be interpreted as Moscow’s interference in the internal affairs of Belarus, and explained that part of the sum is intended to restructure the country’s old debts. He said: “It has been agreed to allocate a new loan worth $1.5 billion to Belarus. Part of this loan will be used to refinance the funds that were borrowed earlier and [the other] part is new funds.”

Tikhanovskaya, speaking from self-imposed exile in Lithuania, said she believed it was Lukashenko and not the state that should eventually pay back the $1.5 billion. The tiny Baltic country has recognized its famous new guest as the rightful president of Belarus.

“I hope that Putin understands that it is Lukashenko, and not our people, who will have to give back this loan,” she wrote in her Telegram channel.

Putin gave his stamp of approval to Lukashenko’s proposal to amend the Belarusian constitution. There has been speculation in the Russian media that the changes would allow for an orderly transition of power over the next year or two. “We know about your proposal to begin work on the constitution,” Putin said. “I believe it is logical, timely and appropriate.”

A structure, at the top of which is the deputy head of the Constitutional Court of Belarus, has already been established to implement the proposed amendments, the Russian president noted. “I am certain that, considering your experience of political work, the work on this track will be organized at the highest level as well, which will make it possible to achieve new frontiers in developing the country’s political system, meaning it will create conditions for further development.”

Putin added that it was up to Belarusian citizens to normalize the situation in their country without external influence. “Our position is that Belarusians should handle this situation on their own, via calm dialogue and without hints and pressure from outside, and arrive at a common solution,” he said.

In later remarks, Peskov effectively warned the West to butt out of the process. “This is an internal Belarusian process, and no one should interfere in it in any way – neither Moscow, nor other European capitals,” he emphasized.

At the start of the talks, Putin explained that Russian soldiers would return to their permanent home bases after they had completed scheduled joint exercises with Belarus. His remarks came in the midst of Western speculation about Moscow establishing a military base on its neighbor’s territory. Peskov said this was not discussed.

“After the joint drills program is complete, the Russian forces will return to their permanent deployment locations,” Putin said. The drills, scheduled last year, began on September 14 and will last for several days. “To a certain degree, it’s a routine for the military – it’s about the training of forces. I repeat it once more, to rule out any speculation: this is an event [that was] planned and even announced last year.”

Putin said that Russia and Belarus would continue to cooperate on defense, adding that he was speaking primarily about military industrial enterprises, where large-scale cooperation was developing, “including in rather sensitive fields.” The countries have a mutual defense pact via the Common Security Treaty Organization, a Moscow-led alternative to the US-dominated NATO bloc.

Nationwide demonstrations have engulfed Belarus since the August 9 presidential election. According to the Central Election Commission’s official results, Lukashenko won by a landslide, garnering 80.10 percent of the vote. His closest rival in the race, Tikhanovskaya, came second, with 10.12 percent, but refused to recognize the election’s outcome and left the country within days.

After the results of the exit polls were announced, mass protests erupted in downtown Minsk and other Belarusian cities. During the early post-election period, the rallies snowballed into fierce clashes between protesters and police. The current unrest is being cheered on by the opposition’s Coordination Council, which has been beating the drum for more protests. In response, the Belarusian authorities have demanded that these unauthorized demonstrations be stopped.