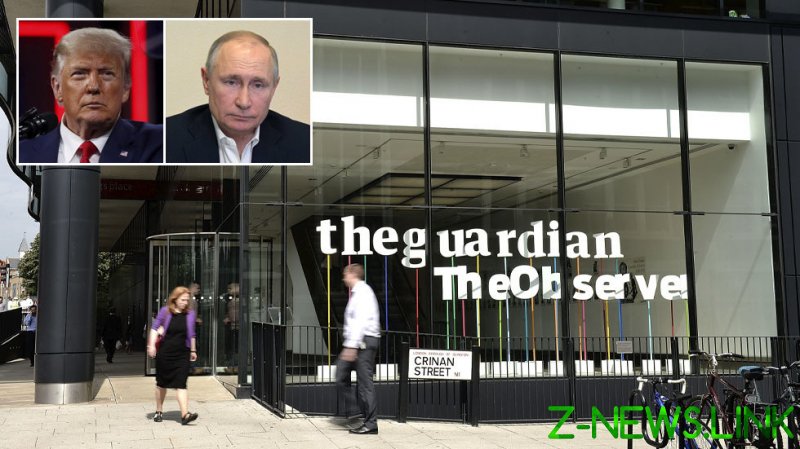 In comments made exclusively to RT on Thursday evening, Putin’s spokesman slammed the report, published in the UK’s Guardian newspaper earlier that day. “This is total fiction,” Dmitry Peskov remarked. “Strictly speaking, it is complete nonsense. Of course, this is the hallmark of an absolutely low-quality publication. Either the newspaper is trying to somehow increase its popularity or is sticking to a rabidly Russophobic line.”

The article, authored by British journalist Luke Harding and two other staffers at the outlet, claimed that Putin had “Personally authorised a secret spy agency operation to support a “mentally unstable” Donald Trump in the 2016 US presidential election, during a closed session of Russia’s national security council.” The bombshell revelations were purportedly based on “what are assessed to be leaked Kremlin documents.”

Harding has a history of publishing false stories related to the so-called “Russiagate” conspiracy theory, which became popular after Trump was elected to America’s highest office. In 2018, for instance, he published a completely fake tale about dissident publisher Julian Assange and the American lobbyist Paul Manafort supposedly having met in London. The article was also based on anonymous ‘sources.’ Although the allegation has been thoroughly debunked, the Guardian has refused to correct the record.

While working in Moscow in 2007, Harding was accused of plagiarism by The Exile, a small, independent and now defunct magazine. His employer issued an apology at the time.

According to Thursday’s report, top Kremlin officials  agreed a Trump White House would help secure Moscow’s strategic objectives, among them encouraging “social turmoil” in the US and “a weakening of the American president’s negotiating position.” This is despite the frequently fractious state of relations between the two nations and the imposition of sanctions during the Republicans time in office.

“Certainly, all of this does not correspond and cannot possibly be based on the truth. It is fundamentally not true,” Peskov said. “This is either part of an ongoing attempt to demonize Russia and Putin, which The Guardian loves to do from time to time, or it is a desperate attempt to attract some new readers by publishing such tales.”

Trump’s presidency was plagued by a series of ‘Russiagate’ allegations, with opponents frequently insisting that he was aligned with the Kremlin, or even that he’s a Russian “sleeper agent.” Despite the claims, no clear evidence of undue influence was ever presented, linking him to Moscow, and numerous investigations came up short.

In May, one of Russia’s top diplomats told RT that relations with Washington had actually thawed since Trump left office at the beginning of the year, because of a return to predictability. Deputy Permanent Representative to the United Nations, Dmitry Polyanskiy, said “we know that a lot of figures in the current administration are indeed professionals with big diplomatic experience… Sometimes we lacked this with the Trump administration, some figures there were a little bit eccentric or too political and it was very difficult to understand what they were really after,” Polyanskiy explained.