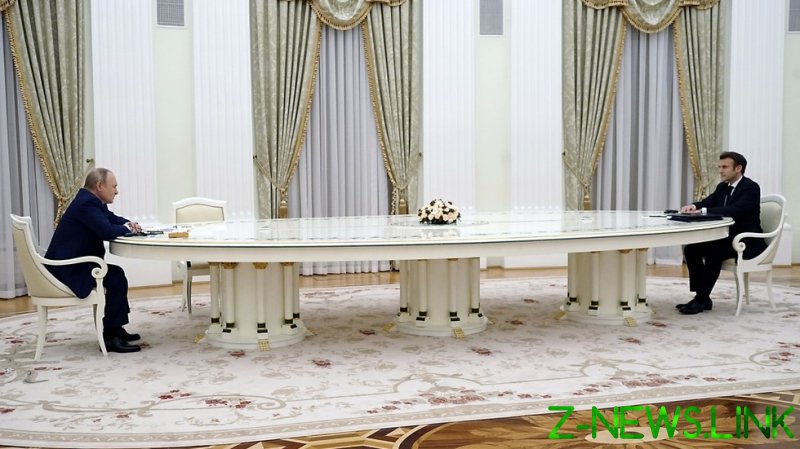 The Kremlin confirmed on Friday that Russian President Vladimir Putin and his French counterpart Emmanuel Macron sat alone at opposite ends of an unusually long table during their talks this week because Macron refused to take a Covid-19 test in Moscow.

“Some leaders follow their own rules and don’t interact with the host party in terms of exchanging the tests,” Kremlin spokesman Dmitry Peskov told Russian media. “It’s a normal practice around the world. However, in this case, an additional protocol of simultaneously protecting the health of our president and our guests is applied, which means a larger [physical] distance.”

The Kremlin insisted that the issue of how Putin and Macron sat during the talks did not involve politics. The space between them “didn’t impede the negotiations in any way,” the spokesman said. He added that the leaders stayed roughly six meters (19.6 feet) apart from each other. 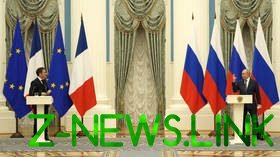 The remarks came after a source in Macron’s team told Reuters that the president had declined to take a PCR test in Moscow because France did not want the Russians to obtain samples of Macron’s DNA. Another source from Macron’s entourage told the outlet that the president took a French PCR test before the trip and had an antigen test administered by his own doctor in Russia.

The unusually long beige table spurred a flurry of memes and jokes on social media.

Macron traveled to Moscow on Monday to discuss the current tensions between NATO and Russia around Ukraine, and the Kremlin’s broader concerns regarding security in Europe.