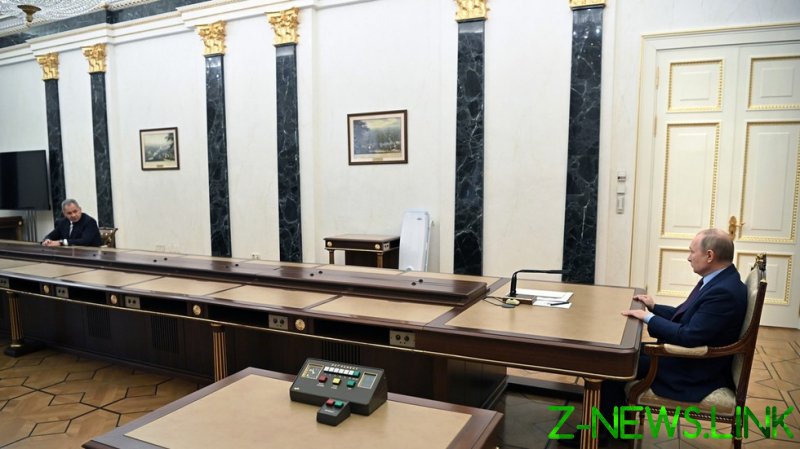 Russia’s president was spotted keeping a very pronounced gap between him and top members of the government during meetings earlier the same day.

Images released by the Kremlin press service showed Putin sitting at the head of a long table, with Lavrov positioned several meters away from him. During a subsequent meeting between Putin and Shoigu, the latter was sitting in the same visibly distant spot.

The unusually large separation between Putin and the ministers caught the eye of the Russian media, with outlets reaching out to Peskov for comment. 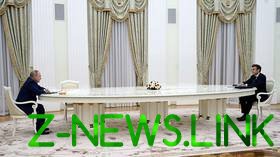 “This was due to Covid restrictions and precautions. Such distance does not affect the work by any means. Fully-fledged discussions and reports to the head of the state took place,” the spokesman stated.

Russia has seen a sharp spike in the number of positive tests for coronavirus in recent weeks. However, in Moscow and across much of the country shops, restaurants, bars and cafes are open as normal with few restrictions in place, and many employees of major companies have returned to their workplaces.

The episode is the second time in days when the Russian president’s unusually sized table has made the headlines. Last week, an extra-long oval table was used during talks between Putin and his French counterpart, Emmanuel Macron, with the two leaders sitting at opposite ends of the massive piece of furniture. Apart from attracting the attention of news outlets, the table invoked a flurry of jokes on social media.

The reasons behind the choice of a long table during Putin-Macron talks were also chalked up to the pandemic. Macron refused to take a Russian PCR test in Moscow, allegedly fearing that his DNA sample might end up being leaked, Reuters reported.

“Some leaders follow their own rules and don’t interact with the host party in terms of exchanging the tests,” Kremlin spokesman Dmitry Peskov explained on Friday. “It’s a normal practice around the world. However, in this case, an additional protocol of simultaneously protecting the health of our president and our guests is applied, which means a larger distance.”