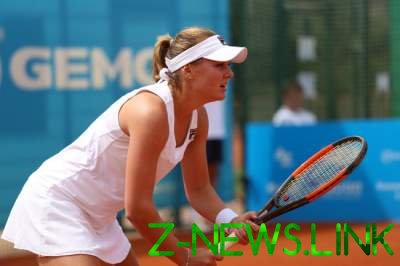 Four of the five tennis players from the Ukraine lost in the first round of a major clay tournament Premier Mandatory in Madrid.

The first racket of the country’s Elina Svitolina failed to return to the tour after a month of inactivity due to a knee injury. In two sets a native of Odessa unexpectedly lost 69-th racket of the world Pauline Parmentier (4:6, 6:7).

Dayana Yastremsky was very close to a sensational victory on the fifth racket of the world of Karolina Pliskova. After his comeback in the first account with the account 3:5 Ukrainka in the second game with the score 5:4 in the reception is not implemented four match-balls, then tie-breaker a judicial error stood Yastremsky another match ball. Experienced Pliskova to set-bole waited errors of the opponent, and in the final set made the break and securely played all the games on her serve.
Lose Yastremsky (7:5, 6:7, 6:3), but the debut appearance in Madrid Diane sure can place yourself in the asset.

Lesya Tsurenko without a chance lost to the ex-first racket of the world, Angelique Kerber (3:6, 2:6). Tsurenko won only 19 of 48 points on his serve and
allowed Kerber to implement a 6 of 8 break points.

Martha Kostiuk after successful completion of training in three sets has lost to Kristina Pliskova (6:3, 3:6, 2:6). In the middle of the second set with the score 3:3, he ceased to have a rival worthy of resistance – until the end of the match the young Ukrainian gave up four games on his serve.

Finally, the author of the only Ukrainian victory on the clay courts of Madrid today was Ekaterina Kozlova, which for the first time at the Mutua Madrid Open. In two sets, the tennis player from Nikolaev dealt with the 42-th racket of the world, Zhang Shuai (6:3, 6:2) and went out to meet Karolina Pliskova.