Home / WORLD / Kosovo’s Albanian police ban Serbian license plates, use tear gas against protesters, as US and EU urge ‘restraint’ on both sides

Kosovo’s Albanian police ban Serbian license plates, use tear gas against protesters, as US and EU urge ‘restraint’ on both sides 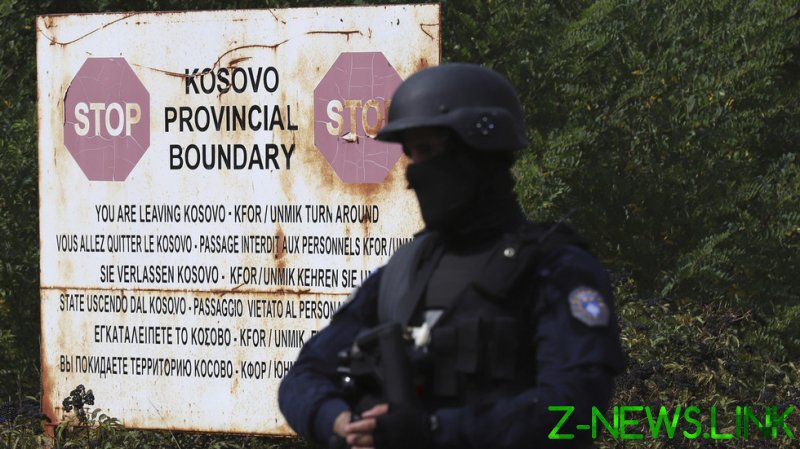 Hundreds of local Serbs have gathered at Jarinje and Brnjak, two ‘border’ crossings between the renegade province – which the ethnic Albanians declared independent in 2008 – and inner Serbia. Heavily armed special units of Kosovo police blocked both checkpoints on Monday morning, insisting that all vehicles with Serbian license plates must get ‘Kosovo’ temporary plates before being allowed to proceed.

Photos from Jarinje showed hundreds of vehicles were backed up for several kilometers into central Serbia. The closure has disrupted the supply of food and medication to Serb communities in the north of the province.

In a replay of events from 2011, local Serbs gathered at the checkpoints and surrounded the police. Police targeted the protesters with tear gas canisters at both Brnjak and Jarinje, but failed to disperse them, local media reported.

Kosovo police have been seizing all license plates from Serb-majority counties in the north of the province, forcing the drivers to use those mandated by the ethnic Albanian government in Pristina, Serbian public television RTS reported. Drivers from central Serbia were told to pay a €5 tax and get temporary ‘Republic of Kosovo’ plates if they wanted to cross into the province.

Serbian President Aleksandar Vucic addressed the nation on Monday afternoon, saying that the ethnic Albanian authorities “magically” interpreted the 2011 and 2016 free movement agreements to mean something that exists only in the mind of Albin Kurti, the hard-line leader in Pristina.

Calling it a “show of force” by the ethnic Albanians, Vucic added that “it’s very hard to reach a rational solution when dealing with irresponsible people only aiming to increase their power.”

The standoff began as the European Union’s special representative Miroslav Lajcak arrived in Belgrade on Monday for scheduled talks with Vucic ahead of the next round of negotiations with Pristina, due to take place in October.

The EU has urged both sides to “exercise restraint” and use the EU-facilitated mechanisms to resolve this and other outstanding issues.

The US embassy in Pristina has echoed the EU statement, “calling on Kosovo and Serbia to exercise restraint, refrain from further unilateral actions, and reduce tensions – immediately, without delay.”

However, Kurti’s hard-line ‘Self-determination’ party insists there can be no negotiations with Serbia, nothing short of full recognition will do, and has even mulled unification with neighboring Albania.

According to Vucic, Kurti’s delegation has refused to discuss any issue with Serbia, including the fate of the missing persons from the 1999 conflict – in which NATO intervened to back ethnic Albanian separatists and occupied Kosovo following a 78-day air war against the Serbs.

Pristina’s attempted takeover of the two checkpoints exactly a decade ago triggered a four-month-long protest by the local Serbs, which also saw tear gas deployed multiple times and even the use of live ammunition by NATO ‘peacekeepers’. The barricades were forcibly dismantled in February 2012 by Serbian gendarmerie. Vucic first came to power thanks to the backlash against that move, with a coalition led by his Progressive Party winning the presidential and general elections later that year.

While Washington recognizes Kosovo as an independent state, five EU members do not. Neither does Serbia, though the government in Belgrade has made a series of ‘technical’ agreements with Pristina over the years – most recently in September 2020, when the Trump administration in Washington got Israel to recognize Kosovo.