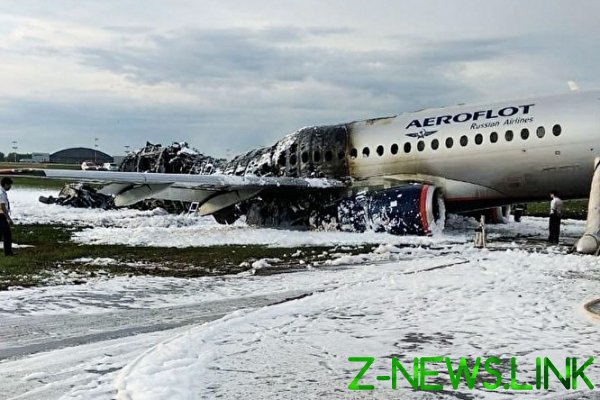 The dominant version in the investigation of the criminal case about the crash of Sukhoi Superjet-100 “Aeroflot” at Sheremetyevo airport on may 5 — a series of errors of pilots, according to the newspaper “Kommersant”.

According to the publication, after 14 minutes after taking off from the airport, the aircraft commander Denis Evdokimov for redundant communication channel told the dispatcher about the lightning and return to airport of departure. According to newspaper’s sources close to the investigation of the accident, the sunset was difficult. Complicating the situation is the lack of communication in the process of landing a large mass due to the presence of fuel in the tanks and the failure of automatics, in particular, has been disabled automatic monitoring the allowable travel speed, congestion, and maximum allowable angles of attack.

The plane, writes “Kommersant”, released on the glide path with flight and ground speed exceeding 30 km/h, but the sources believe that the landing was still quite safe. According to experts, from-for errors of pilots, they have exceeded not only yaw, but the vertical descent rate of the aircraft wheels touch the tarmac too hard. After Bouncing of the ship from the runway, the pilots tried to push the nose of the aircraft to the ground, not to stabilize the ship in landing position, than has provoked a new “progressive” — hops, says “Kommersant”. The second and became critical

While the Interstate aviation Committee said parametric “black box” of the aircraft received serious damage and the sound is in a satisfactory condition. In an official press release said that the specialists of the Scientific-technical centre the POPPY have been working on inspection, removal and preparation of media for copying data. All flight information is copied, prepared for interpretation and analysis.

The air crash with the plane of “Aeroflot”, on Board of which there were 78 people, including five crew members, occurred on the evening of 5 may. According to the Investigative Committee, killed 41 people. As reported earlier, the TFR among versions — lack of qualified pilots, controllers and experts who conducted the technical examination Board, failure of the aircraft and adverse weather conditions.