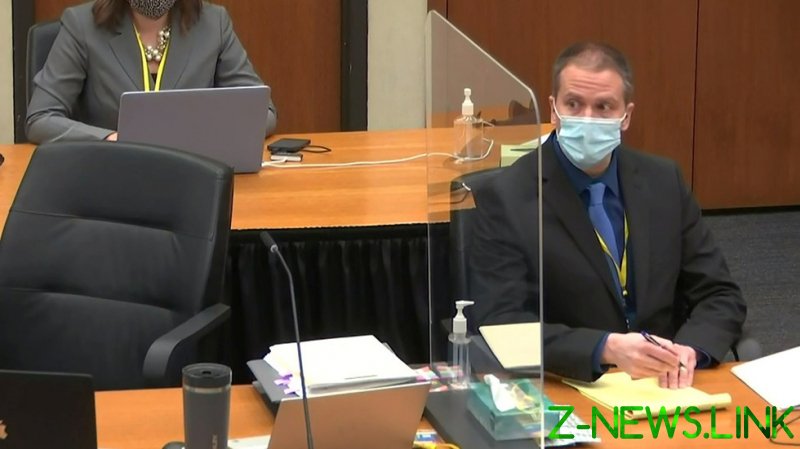 Zimmerman called Chauvin’s decision to kneel on Floyd’s neck for upwards of eight minutes “totally unnecessary” and “uncalled for.” During the trial of the fired officer on Friday, the lieutenant roundly condemned the defendant’s actions.

He said that “once a person is cuffed, the threat level goes down all the way” and it becomes the officer’s responsibility to take care of the person in his charge.

“They’re cuffed, how can they really hurt you?” Zimmerman asked, admitting there was a minor chance of injury nonetheless.

“I saw no reason why the officers felt they were in danger, if that’s what they felt, and that’s what they would have to feel to be able to use that kind of force,” he continued. Asked if “restraint [of Floyd] should have stopped once he was handcuffed and prone on the ground,” he said “absolutely.”

Zimmerman had never been trained to kneel on a handcuffed suspect in the prone position since 1985, he explained, condemning the neck restraint that allegedly killed Floyd as “the top tier, the deadly force” because “if your knee is on someone’s neck, that can kill them.”

Chauvin’s lawyers argued that police training had likely shifted significantly since Zimmerman was coming up in the force, implying his view on what constituted excessive force and his opinion on neck holds probably differed from the views of Chauvin and his three colleagues working with him at the scene of Floyd’s death.

Asked by defense attorney Eric Nelson if it was fair to say some police tactics had changed over the years, Zimmerman said “some” had. Nelson also pointed out that Zimmerman has worked for years in more investigative roles, experiencing fewer situations requiring the use of force.

Nelson got Zimmerman to agree that an officer fighting for his life was allowed to use “whatever means are available to him in order to protect himself and others,” though Zimmerman had already insisted that there was no way Chauvin could have believed he was still threatened by the prone, handcuffed Floyd.

The Minneapolis cop was fired the day after Floyd’s death, which prompted weeks of protesting and violent riots last May. Chauvin is on trial for second and third degree murder as well as second-degree manslaughter.