Killer talk: Democrats & liberal media whip up anti-Russia, anti-GOP hysteria to hide their misdeeds, but this ploy will fail 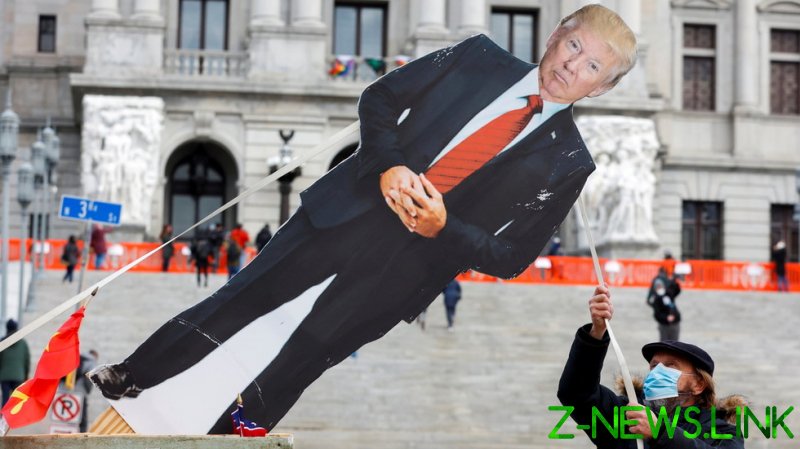 In the paranoid mindset of the Biden administration, sequestered as it is behind a barbed-wire enclosure it erected following the “insurrection” of January 6, enemies are everywhere. From the purported white supremacists and ‘domestic terrorists’ that fill the rosters of the Republican Party, to the “killer” inside of the Kremlin who apparently has nothing better to do these days than meddle in US elections, the list is a long one.

By way of example, consider a recent interview that ABC political commentator George Stephanopoulos conducted with US President Joe Biden, which touched upon an intelligence report that says Vladimir Putin and other senior Russian officials “PROBABLY directed Russia’s influence against the 2020 US Presidential election.” It is the same interview in which Putin is described as “a killer,” not initially by Biden, incidentally, but by his interlocutor. Stephanopoulos asks, apropos of nothing, “You think [Putin’s] a killer?” To which the US leader dutifully responds, “Uh-huh. I do.”

When Stephanopoulos, in typically belligerent liberal fashion, pushes to know “what price he must pay,” the US president’s brain is out to lunch, as he begins to mutter a string of incoherencies and half sentences that have become the trademark of Biden speak.

Clearly, the US mainstream media is back in its comfort zone, at liberty once again to write up its own foreign policy agenda – even during an interview with the president. In fact, it’s surprising that Biden was not taking dictation as Stephanopoulos ran his mouth. Although Donald Trump certainly had his defects, no reporter would have been able to run roughshod over him, making him agree to foolish remarks that could have tremendous repercussions on the world stage.

The irony over the Democratic Party’s endless jabber about “Russian meddling in the US elections” is that the worst offender of that charge is none other than the Democrats themselves. Indeed, Nancy Pelosi’s euphemistically entitled “For the People Act,” should it be passed, would effectively institutionalize ballot fraud in all future elections, quickly turning the Republican Party into a dinosaur more worthy of a museum than any campaign trail.

“The law would make permanent the Covid-19 emergency mail-in voting system, overriding whatever each state’s election law says,” explained the writer James Howard Kunstler, “plus permitting same-day motor-voter registration of any live body, citizen or not, plus removing all voter ID requirements, and much more to ensure the country is never again threatened by a fair election.”

What better way for the Democrats to camouflage their deranged efforts to own the US election system than to scream “The Russians are coming!” at every opportunity?  And the Russian blame game certainly did not end there. Earlier this month, The New York Times ran yet another one of those classic “anonymous sources said” pieces that is loaded to the rafters with potentially explosive consequences. Reporting on yet another unproven incident of “Russian meddling,” this time against US government agencies and corporations, the Times increased global warming dramatically with the following statement:

“The first major move [against Russia] is expected over the next three weeks, officials said, with a series of clandestine actions across Russian networks that are intended to be evident to President Vladimir V. Putin and his intelligence services and military but not to the wider world” (Incidentally, this is not the first time that such threats have been made. In 2016, the US-based Atlantic Council, salivating over the prospect of some hypothetical war with Russia, said cyber-offensive operations could include “the Moscow metro, the St. Petersburg power network, and Russian state-run media outlets such as RT.”)

Keep in mind that the Times released this uncritical bit of bombast even though the identity of the purported perpetrators is not remotely clear. This demonstrates nicely how the left-wing media, which is nothing more or less than the official propaganda arm of the Democratic Party, can forward any insane, unsubstantiated claim without needlessly concerning itself with the blowback – that ranges from defamation claims, to full-blown military escalation.

The same rule applies to the domestic situation, where the Democrat-friendly media can vilify conservative voters, defaming them as ‘white supremacists,’ at the very same time that Black Lives Matter protesters are carrying out “mostly peaceful protests” that still managed to carry a billion-dollar price tag to rebuild destroyed neighborhoods across the country. Just imagine the result had they been ‘mostly violent protests’!

When jaded Trump supporters, most armed with nothing deadlier than iPhones, stormed the Capitol building on January 6 to protest the results of the 2020 presidential election, they were compared to the same al-Qaeda terrorists who carried out the attacks against the United States on 9/11. Yet when BLM and Antifa hurled Molotov cocktails and attacked police at the Portland federal courthouse, eventually seizing an entire urban block of Seattle in an effort to create a “police-free autonomous zone,” the media practically honored them as national heroes.

With this sort of disproportional media support at its disposal, the Democratic Party will continue to exist as a clear and present danger on the global and domestic stage. Thankfully, however, the problem is finally getting some due attention.

Just last week, US Senior Circuit Judge Laurence Silberman, while penning his ruling in a libel case, took issue with “Democratic Party ideological control” that is maintained through its massive media holdings.

“Two of the three most influential papers (at least historically), The New York Times and The Washington Post, are virtually Democratic Party broadsheets,” Silberman wrote. “And the news section of The Wall Street Journal leans in the same direction. The orientation of these three papers is followed by The Associated Press and most large papers across the country (such as the Los Angeles Times, Miami Herald, and Boston Globe).

While it’s certainly positive to see a growing awareness of the problem, it is another thing altogether to find a cure. After all, the owners of the various media, including social media, will not relinquish their awesome powers without a fight. Nor will the Democrats be anxious to lose the primary source of their strength. Yet it seems inevitable that unless a more balanced and impartial view of the political realities is fairly presented, both at home and abroad, the Democratic Party will one day become its own worst enemy.