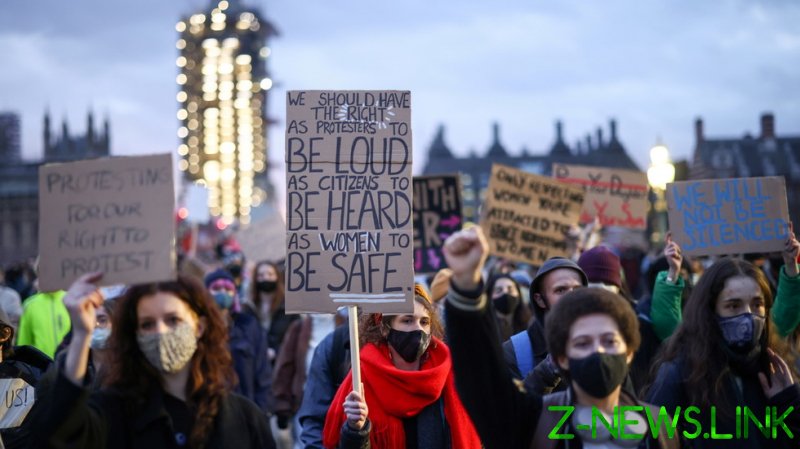 The crowd swelled in Parliament Square where they could be heard shouting “kill the bill” as MPs in the nearby House of Commons had started debating a controversial new policing legislation which could heavily limit protests.

Many demonstrators then walked onto Westminster Bridge, chanting slogans, including “our streets,” and blocking traffic, before leaving the area after around 10 minutes.

The crowd then gathered outside the New Scotland Yard police headquarters and could be heard chanting “quit your job” – a message directed at Metropolitan Police Commissioner Cressida Dick.

The police chief earlier said she would not step down after she was criticised for officers’ heavy-handed tactics at a Sarah Everard vigil on Saturday.

A spokesperson for the Met said those gathered were “causing significant disruption,” including blocking roads, and called for protesters to go home.

The protests have so far remained peaceful, and demonstrators appeared to later move back towards Parliament Square.

A serving Metropolitan Police officer, 48-year-old Wayne Couzens, has been charged with the murder of Sarah Everard, 33.

Her body was found last week in Kent several days after she disappeared while walking home from London’s Brixton area to Clapham.

Everard’s death has sparked a huge public debate about women’s safety and over new legislation that would allow police to further control static protests.

The Police, Crime, Sentencing and Courts Bill, which MPs are to vote on this week, will give police the ability to impose start and finish times on protests, and to set maximum noise levels.

The bill would also give the UK Home Secretary the power to create laws to define “serious disruption to the life of the community.”

Home Secretary Priti Patel has said the bill is necessary to help enforce Covid-19 measures and to update existing legislation, but opposition MPs have warned that it could seriously curb freedom of expression.

In another development, a police officer involved in the search for Everard has been removed from their duties after allegedly sharing an “inappropriate graphic” on social media, the Met said on Monday.

The graphic does not contain a photo of Everard or anything related to her murder. The officer has been referred to the Independent Office for Police Conduct.