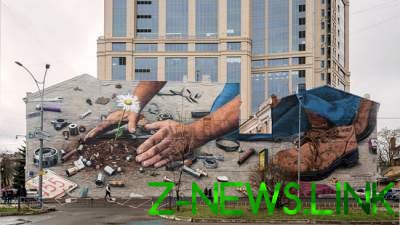 The author of the mural — a young new York artist BKfoxx

The mural, which depicted the Kiev police station was named one of the best in the world this month.

Mural entitled “Rise Up in the Dirt” edition about street art Streetart.Today called one of the best muralov Nov. Graffiti is on the building of the Directorate of the National police of Ukraine in the Pechersk district of Kyiv.

It is known that the figure shows how a man helps the flower to grow, closing her hands from debris and various items that are scattered around.

The world’s first officially painted a police station, it was created in the framework of the project Art United Us, with the support of Dragon Capital.

Today, the murals in the capital have become very popular, many of them worked well-known artists from different countries-Ukraine, Spain, UK, Italy, etc.

We will remind, earlier “Comments. Kyiv” reported that a young artist working under the pseudonym BKfoxx and started painting a new work at the end of October.