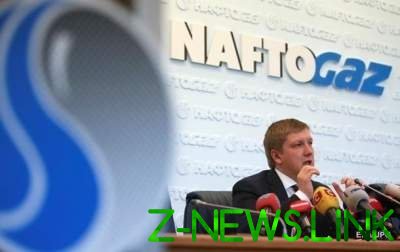 The final decision on the supply to Ukraine of American gas is still pending, says the head of Naftogaz.

“This time we approached this issue (of gas supplies from the US) is very close. This is not a final decision, but there is interest on both sides. I hope that in the near future this interest transformirovalsya in particular streams of gas,” – said Kobolyev

According to media reports, the head of Naftogaz was may 1 in Washington, where he intended to enlist the support of the American side in the gas negotiations with Russia, as well as on joint counteraction to construction of the gas pipeline Nord stream-2.

“Our main message relates primarily to the difficult situation which developed round the contract on gas transit through the territory of Ukraine after 2019,” – said the head of the company. KOBOLEV noted that from 2020, this agreement shall terminate, and while Kiev Gazprom’s position is “incomprehensible”.

“We believe that they are playing for time. Their goal is to create an artificial crisis after 2019, starting with 1 January as it was in 2009, that is, 10 years ago, and try to make a crisis that will allow them to promote their own interest,” – said the head of Naftogaz, noting that the probability of “a new gas war” between Kiev and Moscow 2020 “very high”.

KOBOLEV said that encourages the Ukrainian authorities to conduct work in two directions, in order to prevent possible gas shortage in the country is to increase imports of gas from European destinations, as well as to increase the fuel reserves in underground storage facilities. He noted that for the current year is planned to increase gas reserves in underground storage facilities in Ukraine to 3 billion cubic meters to 20 billion cubic meters.

As you know, the contract between Naftogaz and Russia’s Gazprom on gas transit ends at the end of 2019. Two rounds of negotiations with the participation of the European Commission to no avail.