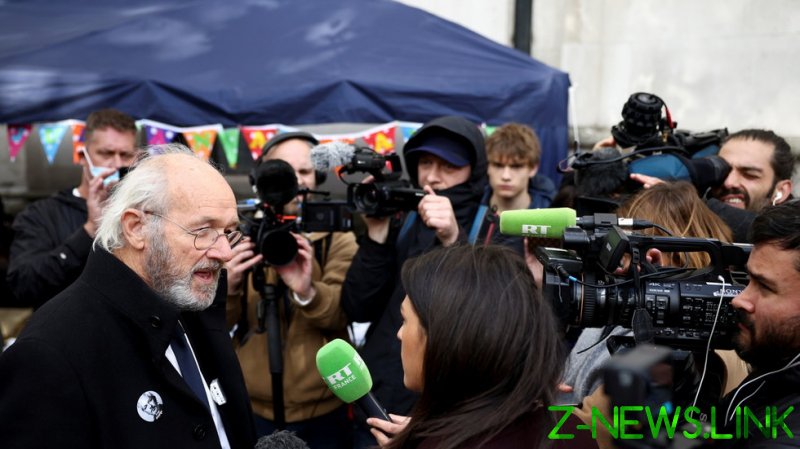 Prosecution of WikiLeaks co-founder Julian Assange has turned into a “zombie case” that continues to “raise itself from the dead” and just “won’t die,” his father John Shipton told RT, though it should have ended long ago due to the many scandals surrounding it.

Shipton singled out the fact that an Icelandic WikiLeaks volunteer – turned FBI informant – named Sigurdur Ingi Thordarson admitted this summer that Assange never instructed him to carry out any computer hacking, despite earlier testimony to the contrary. Thordarson himself has since been arrested in Iceland, but this story seemingly did not affect Assange’s case in any way.

The prosecution seems to just disregard all the context surrounding this high-profile case, believes John Rees, organizer of the ‘Don’t Extradite Assange Campaign.’

“They are denying the impact of spying at the Ecuadorian embassy; they are denying the fact that a leading witness [revealed] himself to be a liar. They are ignoring the CIA kidnap-or-kill plot,” Rees told RT, adding these are all facts that ought to play a vital role in analyzing the case.

If this case is allowed to proceed and Assange is eventually handed over to the US justice system, that might spell disaster for him, warned Kristinn Hrafnnson, an Icelandic investigative journalist who was the spokesperson for WikiLeaks before becoming its editor in chief in 2018. Although Hrafnnson believes that the “common sense” judgement in this case would be to not extradite the WikiLeaks founder, he still fears that this could be “far away” when the British judge passes their judgement.

If Assange does get extradited to the US, “it is certain that he will be convicted in… Virginia, where the jury pool is between 60 and 80 percent either direct employees of the CIA or the State Department or their close family members,” Hrafnnson alleged.

“He is charged with offenses that can carry up to 175 years in prison. That could be the outcome. On top of that, he could be put in isolation; in solitary confinement. That is a certainty, no matter what hollow assurances they try to maintain,” Hrafnsson added, pointing to the fact that Amnesty International recently stated that US assurances are “not worth the paper they are written on” due to the fact that “prolonged solitary confinement” is commonplace in the country.

Lauri Love, a British activist who himself barely escaped the attention of the US justice system over his alleged activities with the Anonymous hacker collective, also harbors no illusions about what Assange could face if extradited to America.

The US prison system is designed to degrade people by treating them “worse than animals,” he told RT, calling it nothing short of a “source of slave labor” in a modern-day world, where inmates are forced to “work to survive” and maintain contact with their families.

“Someone like Julian Assange, who is considered such a risk to the powers that be for his acts of journalism, would be subjected to special measures that just mean solitary confinement and that effectively means being [subjected] to torture,” Love added.

British MP and former Labour leader Jeremy Corbyn said that Assange had already suffered enough despite having “no convictions” in the UK, particularly those that would warrant sending him to a maximum-security prison reserved for people who committed “very serious crimes.” That was on top of the years the WikiLeaks founder had to spend inside the Ecuadorian embassy, where he was subjected to surveillance, he added.

“Mr. Assange has paid a massive price already for telling the world the truth of the dangers that we face from illegal war,” Corbyn said, adding that he hopes the WikiLeaks founder “is allowed to stay and the appeal launched by President [Joe] Biden will be rejected.”

‘Oppression of journalists’ will continue?

Assange’s supporters argue that the reasons that allowed this case to drag for so long are purely political. They believe the “powers that be” seek to make Assange an example, to discourage others from following in his footsteps and set a precedent for further persecution of journalists and whistleblowers.

“Oppression and intimidation of journalists” will continue, Shipton said. As long as the US is allowed to persecute people around the world with impunity, “they will say anything and other countries will take upon themselves this privilege of kidnapping the journalists” under the auspices of Washington, he added.

Love also believes that “the US is trying to exercise its very dubious laws outside of its jurisdiction and lock people up for activities that are in public interest, like journalism in Julian’s case.” In this instance, “efforts are made to discourage particular kinds of bravery, courage or someone having an impudence to stand up to power,” the activist said, adding that one of the issues that should be debated here is “why we should be allowing the US to act as a superior hegemony.”

The very concept of “national security” the US employed in its hunt for Assange is a smokescreen designed to leave people blind to the state’s actions, Rees believes.

“National security is a blanket that covers absolutely anything that a state wants it to cover,” he said. “What it really means is that you cannot tell people vitally important things about the way in which their country is run under this system.”

Assange’s supporters have been rallying in London to demand freedom for the jailed WikiLeaks co-founder for several days now, as the UK High Court met to hear the US appeal to extradite the journalist. On Thursday, the hearing ended with no immediate ruling.

The US government’s original extradition request was rejected in January, when UK Judge Vanessa Baraitser ruled that Assange, whose mental health had been rapidly deteriorating, would be at risk of suicide in an American prison.

Assange could face up to 175 years in prison if extradited to the US and found guilty of charges of violating the Espionage Act. He has been held in London’s top-security Belmarsh Prison since April 2019, when he was dragged out of the embassy after Ecuador revoked his asylum.