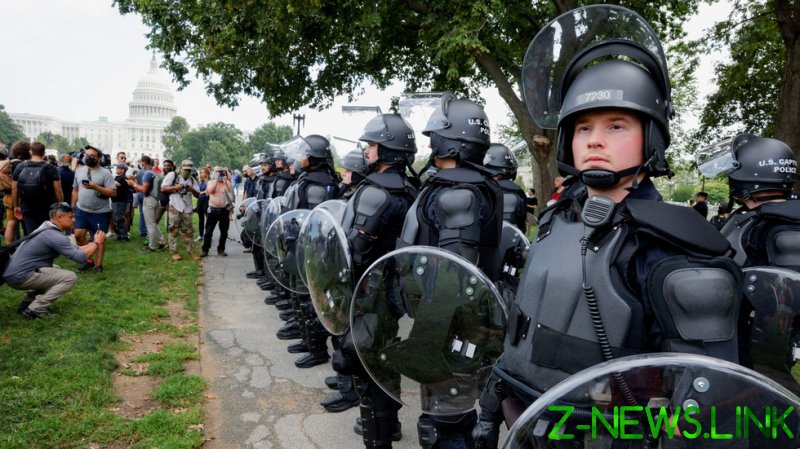 Ahead of Saturday’s rally – which reports have claimed could bring in as many as 700 Donald Trump supporters – the US Capitol Police Twitter account posted an image of hundreds of officers from multiple law enforcement agencies standing, ready to take orders from a Capitol police officer with a bullhorn.

“Teamwork,” the tweet read. National Guard soldiers are also on standby in case they are needed. Most officers called in for Saturday’s events are equipped with batons and safety vests.

While numerous conservative pundits have dismissed the rally and its potential fallout, liberal critics have been celebrating the massive police preparation for the event, tying it to the January 6 Capitol riot that led to multiple deaths, including a protester shot by an officer.

“Kid gloves off today,” one Twitter user wrote in response to the photo of the waiting law enforcement officers.

“Deal with them accordingly,” another cryptically added.

Many have blasted police for over-preparing for the event.

According to the permit obtained by organizers Look Ahead America, hundreds are expected to attend the rally near the West Lawn of the Capitol building. They are looking to highlight the “inhumane” treatment many jailed Capitol rioters have allegedly faced. Hundreds have been charged for their part in January 6’s events, and dozens remain behind bars.

US Capitol Police Chief J. Thomas Manger warned on Friday that any potential violence will be shut down quickly.

“We have a strong plan in place to ensure that it remains peaceful and that if violence does occur, that we can stop it as quickly as possible,” Manger said, claiming there have already been threats of violence against lawmakers.

Look Ahead America Executive Director Matt Braynard, however, has described the event as “peaceful.”

“The purpose of these peaceful protests is for patriotic Americans to educate their state legislators on the power they have to give instructions to their state’s federal legislators,” he said.